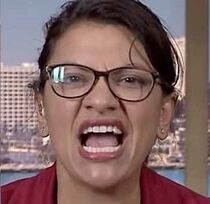 Liberation Road, formerly the Freedom Road Socialist Organization is one of four major Marxist organizations in a United front to infiltrate and control the Democrat Party.[1] The others are:

Liberation Road is comprised of dozens of groups. The radical-left model is based on building alliances of many organizations, small and large, working separate issues but dedicated ultimately to the same thing: overthrowing the society to replace it with a hardcore socialist (or communist) one. The Black Lives Matter organization is one of many projects undertaken by Liberation Road.

As with any misleadingly-named Communist organization or front group, Liberation Road is not about "liberation" of anything, but the exact opposite, subjugation and enslavement of society under Communism. FRSO was one the primary community organizing efforts of the 2020 Marxist insurrection.[2]

Liberation Road is a hereditary descendant of the New Communist Movement inspired by Chinese dictator Mao Zedong and the many communist revolutions occurring throughout the world in the 1960s and ’70s. Liberation Road split into two separate groups in 1999, FRSO/Fight Back and FRSO/OSCL (Freedom Road Socialist Organization/Organización Socialista del Camino Para la Libertad). The Black Lives Matter orhanization and its founders are allied with the latter.[3][4]

Highlighting FRSO’s orientation toward gay blacks, it describes how “Black, queer and trans folks bear a unique burden from a hetero-patriarchal society that disposes of us like garbage and simultaneously fetishizes us and profits off of us, and that is state violence.”[5]

FRSO was prominent at the Ferguson protests and videoed the event. It has even created a Black Lives Matter button.

In October 2010, a day before "community activists" were expected to present subpoenaed documents to a grand jury in Chicago, 68 organizations and dozens of public figures demanded an end to FBI investigations and grand jury subpoenas on Chicago and Minneapolis activists (mainly connected to the Freedom Road Socialist Organization/FightBack!) accused of supporting terrorist groups in the Middle East and Latin America via a jointly signed letter. Signatories included the American Friends Service Committee (Western Region), National Network for Immigrant and Refugee Rights, and American-Arab anti-Discrimination Committee, as well as four San Francisco Supervisors, and Rashida Tlaib.

The jointly signed letter was presented in response to the September 24, 2010, FBI Raids on the Illinois and Minnesota homes and offices of at least 14 activists targeted for alleged "Material Support for Terrorism."[6]

The pro-China Freedom Road Socialist Organization (now Liberation Road) and its allies claim to have brought nearly 10,000 activists into St. Louis, Missouri, to swell the ranks of the rioters.

Carl Davidson and Pat Fry, co-chairs of the Committees of Correspondence of Democratic Socialism (CCDS), exploited the revolutionary atmosphere of the Ferguson riots to create an eight-point plan for “Left Unity” demanding “a common aspiration for socialism.”[7] The pro-China Freedom Road Socialist Organization (now Liberation Road) and its allies claim to have brought nearly 10,000 activists into St. Louis, Missouri, to swell the ranks of the rioters. Four police officers and two civilians were injured by gunfire from the protesters. Of those arrested, some had come from as far as New York, California and Washington.[8] Maoist activists from the Freedom Road Socialist Organization (FRSO) can take most, if not all, of the credit for inciting the Kenosha riots. FRSO is based in the Midwest. It has maintained a strong presence in Chicago and Minneapolis for decades. The subversive organization has expanded in recent years into Milwaukee and the smaller university towns of Oshkosh and Kenosha, where new cadre are recruited through campus branches of FRSO’s youth wing: New Students for a Democratic Society. Journalist Tevor Louden has extensively research the FRSO.[9]

It was the Minneapolis affiliate of the NAARPR—the Twin Cities Coalition 4 Justice 4 Jamar—headed by FRSO comrades Jess Sundin and Lorraine VanPelt that is credited with sparking the Minneapolis riots. Kenosha police reported 102 of 176 arrests were of out-of-towners.[10]

When protesters gathered in downtown Kenosha after the Aug. 23 police-involved shooting of Jacob Blake, three banners were clearly visible at the head of the several-hundred-strong crowd: the bright red FRSO banner, the green banner of the Milwaukee Alliance Against Racist and Political Repression, and the smaller black flag of New Students for a Democratic Society—probably the local University of Wisconsin—Parkside branch.

Just before the march, a young woman led the crowd in a chant of “long live the revolution” directly in front of the signature FRSO banner. FRSO Facebook pages (both Wisconsin and national) contain extensive coverage of the protests and riots—as does the FRSO-affiliated website FightBack! News.

A Wisconsin FRSO Facebook page post on Aug. 25 features a quote from Chairman Mao Zedong over a picture of the Kenosha protest and the hashtags #Justice4JacobBlake #NationalLiberation and #Kenosha.

“The people, and the people alone, are the motive force in the making of world history.” — Mao Zedong

The Facebook post then highlights “our comrades on the frontlines down in Kenosha tonight.” FRSO’s FightBack! News declared:

“Members of the Milwaukee Alliance Against Racist and Political Repression and Freedom Road Socialist Organization are participating in the protests.”

The morning after the first riots, FightBack! News described the previous night’s chaos as an “Uprising underway in Kenosha:”

“Riot police assembled at the scene of the shooting as the crowd began to gather, including members of the Milwaukee Alliance Against Racist and Political Repression. Those assembled quickly grew restless in their anger. Squad cars were smashed and Molotovs were thrown. The people chased the cops away and then set off on a march to the Kenosha Police Department (KPD) downtown.

“When protesters arrived at the KPD building, they rallied in the front parking lot. As the crowd swelled, SWAT trucks and riot cops rolled onto the scene. Tear gas was deployed, but not enough to disperse the crowd. The riot police formed a line and attempted to push the crowd away from the building and out of the parking lot. The people met them with linked arms and prevented their advance. Holding strong, the people chanted ‘No justice, no peace!’ and ‘Jacob Blake!’

“Eventually, the riot police began to retreat into the police station. People from the crowd threw fireworks behind the row of cops. Then the second wave of tear gas was fired into the line of protesters, this time in a more substantial quantity, forcing them to break up. In spite of these efforts, people would not quit. More cop cars were smashed and other vehicles used by KPD to block roads were set on fire.”

The language is similar to that used in the wake of the Minneapolis riots. During an interview with the Green Flame podcast (that has since been removed from their website), Minneapolis FRSO comrade and protest organizer Sundin said:

“The first two weeks after George Floyd was killed saw an intensely high level of organizing all day and all night every day. During the day we would have marches and rallies and at night the focus was often at the Third Precinct. Which is the police station where George Floyd’s killers were working out of … I can’t tell you the joy it brought all of us to see the Third Precinct destroyed.”[11]

“On May 28, thousands more in that city organized and marched and forced the police into a full retreat from the Third Precinct police station and it was righteously burned.”