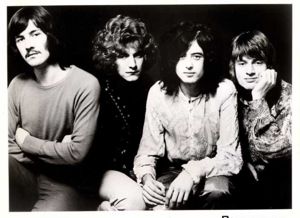 Led Zeppelin were a British rock group formed in 1968 by guitarist Jimmy Page, along with other founding members Robert Plant (vocals), John Paul Jones (bass guitar and keyboards) and John Bonham (drums). They are one of the most well-known bands in the history of rock and roll and were instrumental in the creation of the heavy metal and hard-rock subgenres.[1]

The band was formed by Page after his previous band, The Yardbirds, split up with outstanding contractual obligations to play a number of concerts. They were notoriously private and spurned the publicity machine usually favored by groups. They refused to release singles to promote their albums in the UK and rarely made television appearances (which were curtailed after the release of the first album), preferring instead to tour extensively.

Their second album, simply called Led Zeppelin II (1969), placed the band firmly in the vanguard of the heavy rock movement and featured a track which became their first US Number 1, "Whole Lotta Love".

The third album, Led Zeppelin III (1970), featured a more acoustic sound and drew on folk influences, but still had room for hard rock in "Immigrant Song" and the blues in "Since I've Been Loving You".

Their fourth album (1971) which was untitled and did not feature the band on the cover, became known as Led Zeppelin IV or Four Symbols (the "symbols" being four runic symbols on the inside cover, one associated with each member of the band). This album launched Led Zeppelin into a new level as the track "Stairway to Heaven" became the most requested track on US radio ever.

Houses of the Holy (1973) broadened the scope of the band even further with the reggae-influenced "D'Yer Mak'er" and the mysterious , lingering "No Quarter".

After the release of Houses of the Holy the band's next project was the mostly live concert film, The Song remains the Same, named after a track on that album and featuring footage of the Madison Square Garden concerts from their 1973 tour.

Physical Graffiti (1975) was a double album that covered many themes and included "Kashmir". It was followed by Presence (1976), their only album not to feature any keyboard. Their final album, In Through the Out Door, was released in 1979.

In 1979 Led Zeppelin played their two largest concerts, in front of 400,000 people at the Knebworth Festival. Parts of the first Knebworth concert later featured on the Led Zeppelin DVD released in 2002, which also included footage from a show at the Royal Albert Hall in London from 1970 and shows at Madison Square Garden and Earls Court from 1973 and 1975 respectively.

After playing a short European tour in the summer of 1980, the band began preparing for a longer North American tour when John Bonham suddenly died due to overconsumption of alcohol. The band subsequently broke up, as Plant, Page, and Jones each pursued solo careers to varying degrees of success. The three surviving members would reunite in 1985 for the Live Aid concert, in 1988 for the Atlantic Records 40th Anniversary concert, and in 1995 for their induction into the Rock and Roll Hall of Fame. Page and Plant also reunited (without Jones) to record an album covering Led Zeppelin songs, and an album of originals.

The band reformed (with Bonham's son Jason replacing his father on drums) in 2007 to perform at the Ahmet Ertegun Tribute Concert at the O2 Arena in London. Tickets were priced at £125 ($250) and were alloted via a lottery system. Approximately 1 million people applied to see the band perform in the 20,000 capacity venue. There is currently speculation (fueled partly by comments made by Page and Jason Bonham) that the band may embark on a tour after Plant has completed his current touring schedule with American bluegrass musician Alison Krauss in support of their album Raising Sand (2007). Further speculation was fueled when Jimmy Page and John Paul Jones appeared on stage during the encore of a Foo Fighters gig at Wembley Stadium, London, to play Zeppelin classic Rock and Roll.