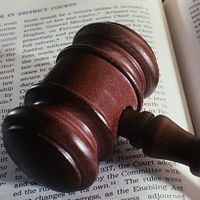 The law is a code of rules that all people in a certain society must follow.

The law is a combination of those rules and principles of conduct promulgated by legislative authority, derived from court decisions and established by local custom.

In the United States, the law is comprised of legislative acts creating statutes, court decisions, executive orders and rules and regulations promulgated by administrative agencies. In certain circumstances, censoring liberal activists have taken the position that the "law" also includes any action by government actors, including prayer by teachers in schools. It is through this flawed assumption that liberals have been successful in censoring prayer in schools. The position that the actions of a school teacher are tenuous at best, and had no basis in real law until liberal activist judges gave it substance in school prayer cases in order to further their ideological preferences.

John Locke writes that law is a positive good derived from the law of reason and the laws of God, and that laws exist to preserve God's gift of freedom, not to ruin it. He explains:

The law, that was to govern Adam, was the same that was to govern all his posterity, the law of reason. But his offspring having another way of entrance into the world, different from him, by a natural birth, that produced them ignorant and without the use of reason, they were not presently under that law; for nobody can be under a law which is not promulgated to him; and this law being promulgated or made known by reason only, he that is not come to the of his reason, cannot be said to be under this law; and Adam's children, being not presently as soon as born under this law of reason, were not presently free. For law in its true notion, is not so much the limitation as the direction of a free and intelligent agent to his proper interest, and prescribes no farther than is for the general good of those under that law; could they be happier without it, the law as an useless thing, would of itself vanish; and that ill deserves the name of confinement which hedges us in only from bogs and precipices. So that, however it may be mistaken, the end of law is not to abolish or restrain, but to preserve and enlarge freedom. For in all the states of created beings capable of laws, where there is no law there is no freedom. For liberty is to be free from restraint and violence from others; which cannot be, where there is no law: but freedom is not, as we are told, a liberty for every man to do what he lists, (for who could be free, when every other man's humour might domineer over him?) but a liberty to dispose, and order as he lists, his person, actions, possessions, and his whole property, within the allowance of those laws, under which he is, and therein not to be subject to the arbitrary will of another, but freely follow his own. [1]