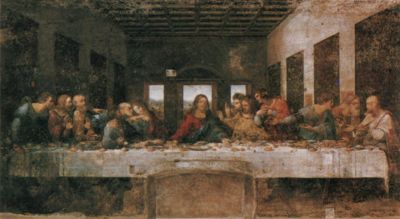 The Last Supper was Jesus' final meal with his Apostles before the Passion. This event, which was held in an upper room in or around Jerusalem, is described in detail in all four Gospels. The room is unknown but probably belonged to a follower of Jesus, as the Apostles continued to meet there after the Resurrection. Subsequently, it became the first church in Jerusalem, known as the Church of the Apostles or the Church of Sion.[1]

There were many defining moments of the Christian faith at the Last Supper:

Leonardo da Vinci drew Jesus's Last Supper on a wall in 1498, and it was immediately recognized as a masterpiece. This artwork depicts the institution of the Eucharist, an essential aspect of Christianity. Each Apostle, and Jesus Himself, is shown in very human and expressive terms. There are no halos or signs of saintliness in this painting. Instead, everyone's human side is displayed with emotion and feeling.

Unfortunately the painting has deteriorated along with the wall on which it rests. It has been repainted several times in efforts to restore it.