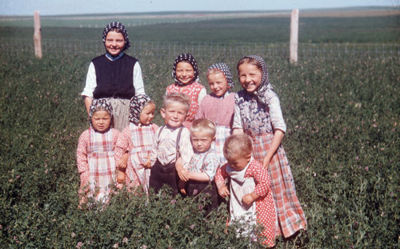 Hutterite children in Saskatchewan, 1954. Hutterian girls all wear a head covering, or tiechel, in obedience of 1 Corinthians 11:4-5.

The Hutterian Brethren, or Hutterites, are a communal branch of Anabaptists similar to the Amish and Mennonites, originating from the Reformation of the 16th century.

The origins of the movement were within the Swiss Anabaptist movement, which grew out of the conviction that:

This movement became known as the Anabaptists ("re-baptizers") because they were baptized a second time, in adulthood. The first communal village, known as a bruderhof (German: "place of brothers"), was established in 1528, in Moravia. Five years later they were joined by a South Tyrolean preacher, Jacob Hutter, from whom the sect acquired its name. Despite repeated persecution (Hutter was burned at the stake in 1536), by the beginning of the seventeenth century there were around 70,000 Hutterites and over ninety bruderhofe.