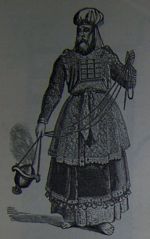 The high priest (Hebrew כהן גדול, kohen gadol, or Greek αρχιερευς, archiereus) was the chief sacerdotal officer in ancient Israel, the Kingdom of Judah, the Babylonian Captivity, and Judea under the successive occupations by the Persian Empire, Alexander the Great, the Seleucid Empire, and finally the Roman Empire. The line of high priests began with Aaron and ended with the destruction of the Temple of Jerusalem in 70 AD.[1][2][3][4][5]

The high priest was the chief administrative officer of all priests. He was in charge of the Tabernacle and later of the Temple of Jerusalem while it stood. He alone was allowed to offer sacrifices for the sins of himself, the priests, or the people. Likewise, only he was allowed to enter the Holy of Holies on the Day of Atonement. Occasionally he would assist the incumbent Judge or king with "inquiring of God" concerning an appropriate course of civil or military action.[2]

During the era of the Judges, the high priest was regarded as an associate Judge. Eli, for example, is described as having "judged" Israel for forty years, which was his term as high priest. (1_Samuel 4:18 )

The high priest also served an expiatory purpose. A man guilty of involuntary manslaughter was required to remain in a city of refuge until the high priest had died. The death of the high priest expiated the original death that the guilty man had caused.[2]

The Bible does not set a specific minimum age for the high priest,[1][2] but normally no one could be a high priest without first being of the minimum age for an ordinary priest, which was thirty. (Numbers 4:1-3 ) However, Aristobulus was appointed by King Herod when he was only seventeen years old.[1][2][6]

The high priesthood was normally hereditary. But Solomon removed one high priest, Abiathar, for political reasons. Thereafter a line of hereditary succession continued, but beginning with the Seleucid Empire, the civil authorities took upon themselves the authority to appoint or remove high priests, and some high priests were even elected by the people.[1]

The high priest could marry only an Israelite virgin, or occasionally the widow of another high priest.[1][2]

He was required to maintain a high degree of holiness. Any sins that he committed reflected on the people as a whole. Thus he was not permitted to come in contact with dead bodies, or to show any outward sign of mourning. This includes clothes rending or exposing the hair or leaving the hair disheveled. (Thus when the high priest Caiaphas tore his clothes at the "trial" of Jesus Christ before the Sanhedrin, he broke the law.)

The high priest wore a series of specialized and symbolic garments that reflected his duties and responsibilities. (Exodus 28 ) These included:

When he entered the Holy of Holies on the Day of Atonement, he was dressed in white linen and did not wear the much more costly garments listed above.[2]

Aaron was the first high priest, followed by his son Eleazar and his grandson Phinehas. Son succeeded father until Eli, of the line of Ithamar, somehow became high priest. (The Bible does not say why.) The family of Eli held the high priesthood relatively briefly; King Solomon removed Abiathar, last of the Ithamarite high priests, and installed Zadok, descendant of Eleazar, in his place. (1_Kings 2:26-27,35 ) This line continued unbroken through the Captivity and the early years of the Return. Josephus states that Antiochus IV Epiphanes was the first non-Israelite monarch to remove a high priest from office.[7]

The Bible says little concerning the full line of high priests and mentions certain high priests who played prominent roles in the history of Israel during the judicial and regal eras. Flavius Josephus claimed that eighty-two men held the office of High Priest until the Temple was destroyed, and that fifty-one of those held the office beginning with the Babylonian Captivity. Josephus does not claim to know the names of every man who served as high priest in history. The Jewish Encyclopedia (1906) has a complete list of these eighty-two men, from Aaron to Phinehas (a high priest elected during the Jewish War), drawn from the Bible, Josephus' Antiquities, and the Seder 'Olam Zuṭa.