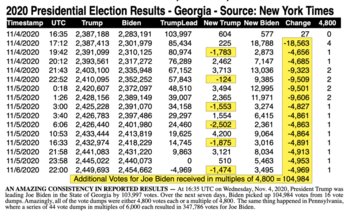 On March 6, 2020 the Georgia Secretary of State, Brad Raffensperger, signed off on a secret legal agreement with the Democratic Party of Georgia, the Democratic Senatorial Campaign Committee, and the Democratic Congressional Campaign Committee to alter absentee ballot procedures in Georgia.[2] The Democrats’ attorney for this secret deal was Marc Elias from Perkins Coie,[3] the bagman for Hillary Clinton who hire FusionGPS to write the Steele dossier during the 2016 presidential election.

The Dominion system used in Georgia erodes and undermines the reconciliation of the number of voters and the number of ballots cast, opening the door to ballot stuffing and fraud. The collapse of reconciliation was seen in Georgia’s primary and runoff elections this year, and in the November 2020 election, where it was discovered during the hand audit that 3,300 votes were found on memory sticks that were not uploaded on election night, plus in Floyd county, another 2,600 absentee ballots had not been scanned. These “found votes” reduced Biden’s lead over Donald Trump.[8]

Chain of custody for machines

A poll worker testified specifically to the breach of the chain of custody of the voting machines the night before the election stating:

Fulton County Poll Manager Susan Voyles, a veteran poll worker of 20 years testified some of the most significant improprieties she witnessed participating in the recount, which Joe Biden supposedly won by around 13,000 votes. Voyles described counting an unusual “pristine” batch of absentee ballots that were cast 98% for Joe Biden. She states that the chain of custody of these absentee ballots was unsigned.

Every single ballot was absolutely identical, and they appeared to be printed with some sort of marking device.”[12][13]

Carlos Silva, a trial lawyer for over 26 years and registered Democrat, volunteered as an observer during the recount. Silva swore under oath,

"7. I watched them pull out a pile of what I observed to be absentee ballots and noticed two very distinct characteristics that these ballots had. One, I noticed that they all had a perfect black bubble and were all Biden select. I was able to observe the perfect bubble for a few minutes before they made me move away from the table. At no time did I speak to the poll workers or obstruct them in any way. I heard them go through the stack and call out Biden's name over 500 times in a row.

8. On the following day...I observed absentee ballots being reviewed with the same perfect bubble that I had seen the night before at Dekalb County....

12. I also saw absentee ballots for Trump inserted into Biden's stack and were counted as Biden votes. This occurred a few times.

13. I also observed throughout my three days in Atlanta, not once did anyone verify signatures on these ballots. In fact, there was no authentication process in place and no envelopes were observed or allowed to be observed.

14. I saw hostility towards Republican observers but never towards Democrat observers. Both were identified by badges.

16. Based on my observations, I have reached the conclusion that in the counties I have observed, there is widespread fraud favoring candidate Biden only. There were thousands of ballots that just had the perfect bubble marked for Biden and no other markings in the rest of the ballot.[14]