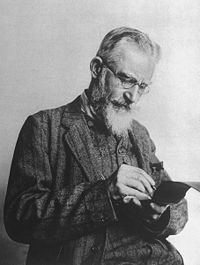 George Bernard Shaw (known as Bernard Shaw or GBS) (July 26, 1856 - November 2, 1950) was an Irish writer, playwright and music and drama critic, born in Dublin. He was a lifelong socialist and a member of the Fabian Society. He was also a proponent of eugenics.[1] Many of his plays had social themes, including Major Barbara and Pygmalion; the latter was the inspiration for the musical My Fair Lady. Also among his many plays were Arms and the Man, The Devil's Disciple and Saint Joan. In 1925 he was awarded the Nobel Prize for Literature.

Shaw was born in 1856 in Dublin, Ireland, to George Carr and Lucinda Elizabeth Shaw.[2]

As a child Shaw attended the Church of Ireland, an autonomous province of the Anglican Communion. Until he was thirty or so, Shaw called himself an atheist. He became one, he later quipped, before he could think.[3] In the 1890s, Shaw repudiated atheism. In his 1931 play, "Too True to be Good," One of Shaw's characters delivers a speech sometimes taken to be Shaw's own view:

But in renouncing materialism, Shaw did not embrace theism, but Nietzschean "Vitalism." Shaw proselytized a mystical "Life Force," which he regarded as an impersonal "will" manifested in the sex drive and evolution, leading toward the development of god in the form of a Nietzschean "Superman."[5] In a 1907 lay sermon at Kensington Town Hall in London, Shaw exhorted:

"In truth, Shaw didn’t believe in an existing God at all," concludes Gary Sloan. "What he believed was that evolution, eons hence, will produce a godlike race in which the life force will consummate its quest for godhead."[7]

Shaw began his education by reading John Stuart Mill, Auguste Comte, Charles Darwin and Herbert Spencer, and was converted to socialism by Henry George's Progress and Poverty. Moving on to Karl Marx's Das Kapital, he began preaching socialism with the utmost zeal and enthusiasm[8] at socialist rallies, or just standing on soapboxes at Speaker's Corner in London's Hyde Park.[9]

After reading the first Fabian tract, Why are the many poor? in 1884, Shaw joined the Fabian Society, which, he wrote, "set up the banner of Socialism militant."[10] He began writing Fabian tracts, and personally converted Sidney Webb to socialism, recruiting him into the Fabian Society.[11]

Bernard Shaw believed the Constitution ought to be abolished, as it kept getting in the way of FDR.

At the invitation of Stalin, Shaw visited the Soviet Union[13] in 1931, at age 75.[14] He became a loyal apologist for Stalinism, reporting the Gulag to be a kind of luxury vacation spa, its large population due solely to "the difficulty of inducing [prisoners] to come out... As far as I could make out they could stay as long as they liked."[15] On the last day of his pilgrimage, he said, "Tomorrow I leave this land of hope and return to our Western countries of despair."[16]

In 1933, Shaw wrote a Letter to the Editor of the Manchester Guardian, denouncing Malcolm Muggeridge's exposé of Stalin's Terror Famine as a "lie" and a "slander"; the following year he published a 16,000-word apologia for Stalin's mass murders, in which he expressed sympathy for the "unfortunate Commissar" who "found himself obliged to put a pistol in his pocket and with his own hand shoot" disobedient workers, "so that he might the more impressively ask the rest of the staff whether they yet grasped the fact that orders are meant to be executed." Shaw went on to attack the rule of law, in favor of the arbitrary rule of men, adding:

In 1936, Shaw publicly defended Stalin's Great Terror, saying, “Even in the opinion of the bitterest enemies of the Soviet Union and of her government, the [purge] trials have clearly demonstrated the existence of active conspiracies against the regime... I am convinced that this is the truth, and I am convinced that it will carry the ring of truth even in Western Europe, even for hostile readers.”[18] Shaw likewise defended Stalin's mass executions, scolding, "we cannot afford to give ourselves moral airs when our most enterprising neighbor... humanely and judiciously liquidates a handful of exploiters and speculators..."[19]

In 1949, he repeated the point, writing, "I am a Communist and always call myself so." The British Communist Party had blundered in failing to tell British voters that, according to Shaw, "in Russia, private enterprise flourishes more than ever." He also argued that the Communists should support the Marshall Plan, which, he said, "is for the moment absolutely necessary."[21] That year Shaw even wrote a defense of Stalin's pseudo-scientific Lysenkoism.

In addition to socialism, Shaw was an advocate of eugenics. "Extermination must be put on a scientific basis if it is ever to be carried out humanely and apologetically as well as thoroughly," he wrote. "[I]f we desire a certain type of civilization and culture we must exterminate the sort of people who do not fit into it."[22] In one public address, recorded in a March 5, 1931 newsreel, Shaw gave expression to the Nazi doctrine of "life unworthy of life" (Lebensunwertes Leben):[23]

One of Shaw's long-term obsessions was mass murder by means of poison gas. In a 1910 lecture before the Eugenics Education Society, he said:

In the BBC's weekly magazine, Shaw made a 1933 "appeal to the chemists to discover a humane gas that will kill instantly and painlessly. Deadly by all means, but humane not cruel..."[26] His appeal would shortly come to fruition in Nazi Germany. As Robert Jay Lifton notes in The Nazi Doctors, "The use of poison gas—first carbon monoxide and then Zyklon B—was the technological achievement permitting 'humane killing.'"[27]

Shaw admired not just Stalin, but Mussolini and even Hitler.[28] He despised freedom, writing, "Mussolini... Hitler and the rest can all depend on me to judge them by their ability to deliver the goods and not by... comfortable notions of freedom."[29]

In the midst of the Battle of Britain, when the Wehrmacht, having routed the British at Dunkirk, was poised on the English Channel and the Luftwaffe was bombing London nightly, Shaw was asked what he would do if he were Prime Minister, if the Nazis invaded. Shaw replied, "Welcome them as tourists."[30]

Shaw has also been criticized as anti-Semitic: he once exhorted Jews to "stop being Jews and start being human beings."[31]

Unlike most eugenicists, who recoiled in horror from the implications of eugenics after World War II, when the horrors of Nazism were exposed to the world, Shaw continued to advocate it, writing in 1948 that we should enslave “a considerable class of persons” who, according to him, “cannot fend for themselves.” Placed under “tutelage, superintendence, and provided sustenance,” such people, says Shaw, “make good infantry soldiers and well-behaved prisoners.” His prescription: “Reorganize their lives for them; and do not prate foolishly about their liberty.”

Shaw continued to advocate mass murder, calling it “kindly but ruthless judicial liquidation”—not for murderers, but for “the criminal you cannot reform” –- career criminals, even those who commit petty crimes.

In addition to recidivists, the death penalty should be applied, he wrote, to “idiots” and “morons”: “Do not punish them. Kill, kill, kill, kill, kill them.” Shaw admitted that most of these people are “quite incapable of committing a murder,” but argued that “the increase or decrease of crime is not the point at issue.” They should be killed, according to Shaw, simply because they are incapable of “paying their way.”

Clarifying that he was advocating mass murder, Shaw added that “on this principle we shall liquidate many more human nuisances than at present if we are to the weed the garden thoroughly.”

Most ominously, among those Shaw marked for death were people he called “ungovernables” and those who are incapable, according to Shaw, of “discharging their social duties.” (These labels perhaps cover those who do not acquiesce to slavery and mass murder.)[32]