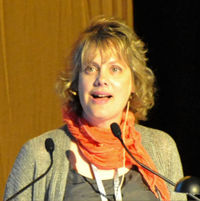 Gaylor’s husband, Dan Barker, who heads the organization along with her, is usually the person invited to speaking engagements, despite her longer tenure as the organization’s leader and her many books on atheism.[1] See also: Atheism and sexism

The Freedom From Religion Foundation (FFRF) is an American atheist/humanist organization in Madison, Wisconsin. The FFRF was co-founded in 1976 by Anne Nicol Gaylor and her daughter, Annie Laurie Gaylor. It was incorporated nationally on April 15, 1978.

Its purposes are to censor or prevent:[2]

It describes its agenda has promoting "freethought", when in practice it amounts to censorship of religious truths.

The Foundation publishes a newspaper called Freethought Today, broadcasts Freethought Radio (also carried on Air America), engages in litigation (it has lost nearly double the number of cases it has won) and sponsors and hosts other activities to educate the public about atheism, humanism, and "freethought." The Foundation often demands that taxpayers pay its own legal fees in its lawsuits against governmental entities.

The atheist Dan Barker and his wife Annie Laurie Gaylor serve as co-presidents of the Freedom From Religion Foundation.

The name of the Foundation

The Constitution guarantees us rights to free exercise, such as free speech, freedom of religion, and the right to bear arms. The name of the Foundation, "Freedom From Religion Foundation," does not reflect a Constitutional right. For example, no one has freedom from speech; likewise, the idea of freedom from religion is fallacious. Dan Barker, co-president of the Freedom From Religion Foundation, says his group is opposed to the nativity scenes and other Christian symbols that appear on public spaces during the holiday season.[6]

The War on Christmas refers specifically to the controversy surrounding the celebration or acknowledgment of the Christmas holiday in government, media, advertising and other secular environments.

The Telegraph reported about the Freedom From Religion Foundation and the War on Christmas:

The "Our Purposes" page on the Freedom From Religion Foundation website [9] contains several incorrect or misleading statements. The statements, along with rebuttals, follow.

"The history of Western civilization shows us that most social and moral progress has been brought about by persons free from religion."

"In modern times the first to speak out for prison reform, for humane treatment of the mentally ill, for abolition of capital punishment, for women's right to vote, for death with dignity for the terminally ill, and for the right to choose contraception, sterilization and abortion have been freethinkers, just as they were the first to call for an end to slavery."

There is a reference to the religious right "...attacking our secular public schools."

"Our Constitution was very purposefully written to be a godless document, whose only references to religion are exclusionary."

"It [The Constitution] is vital to buttress the Jeffersonian "wall of separation between church and state" which has served our nation so well."

In the mid-1990s, the Foundation began displaying a sign at the Wisconsin State Capitol during the Christmas season. It reads:

In fact, the great figures of history have been religious, and charitable giving by theists is significantly higher than giving by atheists, even when church giving is excluded.[10][11]

In response to the display of a nativity scene at the Washington State Capitol, the Foundation placed an identical sign there as well.[12]

In many cities across the nation, the FFRF has sponsored the display of "thought-provoking,"[13] anti-Christian billboards. Some of the slogans on these billboards include:

In late 2008, the FFRF began sponsoring the display of anti-Christian signs on and in Madison, Wisconsin, buses. These signs included quotations from famous atheists like Emily Dickinson, Mark Twain and Richard Dawkins.[18] This sign campaign was inspired by a similar campaign begun in Europe.

A church in Monroe, Wisconsin, responded by sponsoring its own signs, which read (from Psalms 14:1): "The fool hath said in his heart, There is no God."[19] The Foundation refers to this psalm quotation as a "biblical insult to atheists",[20] yet their slogans, especially "Praise Darwin: Evolve Beyond Belief," contain implicit insults.

The Freedom From Religion Foundation declares on their website:

According to Google Trends from 2004 to 2020 there has been a significant decline in web searches for the term "Annie Laurie Gaylor" in the United States.