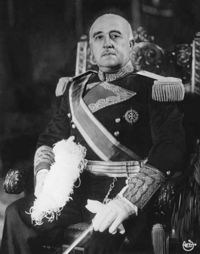 Generalissimo Francisco Franco Bahamonde ("El Caudillo") (December 4, 1892 – November 20, 1975) was a soldier and statesman who served as the dictator of Spain from April 1, 1939, until his death on November 20, 1975. He had previously been a General in the Spanish army. Franco was primarily a traditionalist Catholic.[1][2]

Franco was born in El Ferrol, Spain, in 1892. His father worked as an officer in the Spanish Naval Administrative Corps. At the age of 14, Franco entered the Infantry Academy at Toledo and was stationed in Spanish Morocco in 1912. One year later he was promoted to first lieutenant. When Franco was 22 he became the youngest captain in the Spanish army. In May 1935 he was appointed chief of staff of the Spanish army.

Franco gained power through an attempted military coup d'état in 1936 that developed quickly into the Spanish Civil War. Franco's forces fought the democratically elected Popular Front government – including Communists – government for three years before finally defeating them outside Madrid on April 1, 1939. Franco then assumed control of Spain. His regime rested on the support of a number of stalwart elements in Spanish society - the army, the Roman Catholic Church, rural landowners, and the Falange political party. During the Cold War, Franco was allied to the United States of America.

Franco had a mixed record on Jews. In his tenure, all Jewish organizations in Spain were shut down.[3] In 1941, at the request of the German government, he prepared a list of all 6,000 Jews in Spain to give it to Reichsführer SS Heinrich Himmler.[4] However, he did not do anything with the list and he never handed Jews over to the German government.[5] Some Jews have spoken positively about Franco because of his refusal to take part in the Holocaust.[6] In 1948, Franco identified Jews, along with Masons and Communists, as the great evil facing Spain. He never recognized the state of Israel, though this was due to its opposition to Spanish membership in the United Nations.[7]

Franco ruled Spain as a dictator until his death in 1975. His successor, King Juan Carlos, reversed most of Franco's policies after a period of transition that led to the approval of a democratic constitution in 1978.

Franco was married to Carmen Polo y Martínez-Valdés and had one daughter with her.[8]

Franco was buried in a large mausoleum until 2019, when Spain's Socialist Party government moved his remains.[9]

While often said to be a fascist, and despite adopting certain elements of fascism during his rule, his ideology differed from fascism in several ways. Fascism has the revolutionary aim to transform a society, while Franco's rule was rather conservative and traditional. The main elements of his rule are said to be national conservatism, authoritarianism, anti-freemasonry, anti-Communism, a strong promotion of Roman Catholicism and support of the family. Some of his early supporters in the Falange were fascist, but he distanced himself from fascism after World War II.