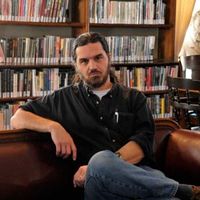 Although he is not a creationist, the atheist philosopher John Gray admitted in 2008 in The Guardian: "A great deal of modern thought consists of secular myths - hollowed-out religious narratives translated into pseudo-science. Dennett's notion that new communications technologies will fundamentally alter the way human beings think is just such a myth."[5]