Essay: Liberals are pantywaists. They have a weak ideology. They will be defeated. 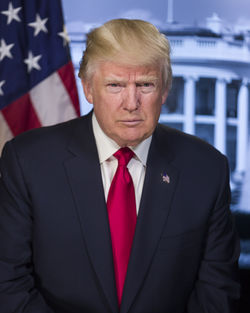 Donald Trump - the man who made liberals cry uncontrollably.

On May 15, 2016, I wrote an essay entitled Political tremors and the supervolcano of conservatism.

Once again, the writing in one the wall.

Four reasons why: Liberals are pantywaists. They possess a pantywaist ideology. They most definitely will be defeated

One to three election cycles - that is when Marine Le Pen will defeat effete, French liberals who are to the left of her. It will be a crushing defeat to liberals worldwide.

1. "Liberals worldwide seem to have concluded, with a collective sigh of relief, that Macron’s emphatic victory is a sign that the global “populist” wave has peaked, and that time is on their side. Such optimism is premature. The weakness of Macron’s appeal—and strength of Le Pen’s—among many young French voters is further evidence of a disquieting truth: In many parts of the world, the young may simply care less about liberal democratic values than they once did."[1]

2. The Next Generation of Americans (Gen Z) May Be the Most Conservative Since WWII.[2]

3. The ability to bounce back after many significant defeats is a key to long term victory. How emotionally resilient are liberals? Will they be able to withstand multiple big defeats over a period of years? In addition, the ability to: pull yourself together and understand why you were defeated; study the opposition and know thy enemy; and come up with a rational plan to eventually win, is a key to long term victory.

4. Furthermore, not only do liberals have to come up with a long term term plan, but it has to be a workable long term plan. Long term, how economically viable is leftist ideology? Does the USA and most Western European countries have high and unsustainable levels debt? Does Japan have a huge and unsustainable amount of government debt? Is Venezuela one of the worst economies in the world? Was a very large part of the Soviet Union's collapse due to economic reasons? Will more and more young people sour on liberalism when the consequences of high government debt hit countries which supported liberalism? Do we liver in a global economy where a lower amount of government debt will be a competitive advantage for countries over the long term? Long term, will lack of economic growth due to high levels of governments force liberal governments to trim overly generous social programs loved by liberals?

To answers these questions please read this paper issued by the European Central Bank: The impact of high and growing level of government debt

Abstract of The impact of high and growing level of government debt published by the European Central Bank:

The conservative William Bennett wrote at CNN in an article entitled Why liberalism will ultimately fail:

Liberals, I hope this essay helps clarifies matters for you all and gives you a greater degree of understanding. I am only doing this for you own good. When liberalism is ground into a fine pulp, it will not be such a great shock to your system.

Why right-wing populism will triumph