From Conservapedia
This is the current revision of Eratosthenes as edited by DavidB4-bot (Talk | contribs) at 15:43, 26 September 2018. This URL is a permanent link to this version of this page.
Revision as of 15:43, 26 September 2018 by DavidB4-bot (Talk | contribs)
(diff) ← Older revision | Latest revision (diff) | Newer revision → (diff)
Jump to: navigation, search 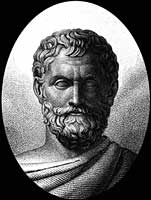 Eratosthenes of Cyrene (275-194 B.C.) was a scientific writer, astronomer, geographer and poet. He was the first to calculate the circumference of the Earth. His technique is the earliest known proof that the Earth is round. He also calculated the tilting of the earth's axis during rotation. He was head librarian at the Library of Alexandria.

Eratosthenes also invented the sieve of Eratosthenes, which is a technique for separating composite from prime numbers in a natural series. The sieve appears in the Introduction to arithmetic by Nicomedes.

Eratosthenes was the third librarian at Alexandria in Egypt. In addition to his knowledge in many different areas, he was an accomplished mapmaker. Eratosthenes also made a catalogue of stars with 675 stars listed in it.

His followers called him the second Plato.

He was, indeed, recognised by his contemporaries as a man of great distinction in all branches of knowledge, though in each subject he just fell short of the highest place. On the latter ground he was called Beta, and another nickname applied to him, Pentathlos, has the same implication, representing as it does an all-round athlete who was not the first runner or wrestler but took the second prize in these contests as well as others.[1]

Eratosthenes died in 194 BC in Alexandria.