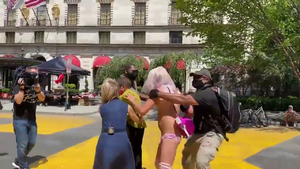 Eleanor Holmes Norton (born June 13, 1937) is the non-voting Delegate to the United States House of Representatives, representing the District of Columbia. As a non-voting member, Norton may serve on committees as well as speak on the House floor; however, she is not permitted to vote on the final passage of any legislation. Antifa church burners set fire to the children's nursery in the historic St. John's Church where Abraham Lincoln prayed during the Civil War.[2]

On the evening of June 1, 2020 the United States Park Police encountered violent protestors throwing bricks, frozen water bottles and caustic liquids. The protestors climbed onto a historic building at the north end of Lafayette Park that was destroyed by arson days prior. Intelligence had revealed calls for violence against the police, and officers found caches of glass bottles, baseball bats and metal poles hidden along the street.[3]

Liberal white protesters obstructed Washington, D.C. police as rioters attempted to storm the White House[4] and ransacked the Treasury Department.[5] Rioters breached the Treasury Department building and the White House was put under a brief lockdown.[6] A gang of white liberals vandalize emergency vehicles outside White House.[7][8] The liberal mob defaced the Lincoln Memorial where Martin Luther King gave his "I Have a Dream" speech,[9] the memorial to 16 million soldiers who fought and defeated fascism,[10] and memorial to 100 million victims of Communism.[11] Two crates filled with pipe bombs were discovered near Korean War Memorial.[12] The lobby, entrance area and the front offices of the AFL-CIO headquarters a block from the White House grounds were left in shambles. Antifa church burners set fire to the historic St. John's Church on Lafayette Square across from the White House.[13] Liberal rioters attacked the White House injuring more than 60 Secret Service agents.[14] Investigators feared leftists using car bombs to kill innocent people.[15]

Spectator USA reported on the damage Democrat church burners did in the nation's capital:

over 100 police showed up last night but essentially did nothing to stop the looting. Their passivity is extraordinary. The idea seems to be that it’s better to allow the looting than to prevent it. It’s an odd mindset: the criminal gets to set the terms of the encounter.

Downtown Washington resembles a war zone rather than the nation’s capital.

Lafayette Square, right across from the White House, is a disgusting mess. The protestations of the protesters extended to defacing statues of the likes of Polish Col. Andrzej Tadeusz Bonawentura Kosciuszko who fought in the American Revolutionary War in the Continental Army. The ubiquitous ‘f*** 12’ was sprayed in black on the plinth. Rather rough treatment, I should think, for a Polish freedom fighter against the Russians who also directed in his will that the proceeds of his American estate be used to procure the freedom of American slaves, including ones that his friend Thomas Jefferson owned.

As the acrid stench of smoke lingered in the air from a fire at the venerable St John’s Church, I strolled over to the middle of the park to look at a Secret Service structure that was covered with such pearls of wisdom as ‘F*** AmericaKKKa’. Buildings, including the Department of Veterans Affairs, had smashed windows. The old standby, ‘eat the rich’, was sprayed near the Bombay Club. Clean-up crews were everywhere, performing the laborious task of effacing, as far as possible, the slogans that had been scribbled to liberate America.[16]