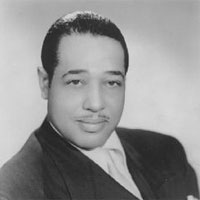 Edward Kennedy "Duke" Ellington (April 29, 1899 – May 24, 1974) was an American bandleader, composer and pianist, not only a towering figure in jazz, but often regarded as one the great composers of the 20th century. While his primary music genres were swing and orchestral jazz, the All Music Guide to Jazz book created a unique category for Ellington, "Beyond Category", due to his unwillingness to confine himself to a single musical style within jazz.

He began his career in New York City, with a residency at the Cotton Club from 1927 during which he developed the ideas of Don Redman and Fletcher Henderson and became instrumental in developing the Big Band sound that was to dominate the 1930s.

The contributions of lead trumpeter Bubber Miley helped define his 'jungle' sound in which the trumpet was made to 'speak' through skillful use of the mute, a style continued by Miley's successor Cootie Williams.

Later, Ellington's band absorbed the influence of the more swinging Count Basie band, whilst remaining true to his original conception of advanced arrangements. Many of his masterpieces were recorded around the time of World War Two.

Ellington continued recording up until his death in 1974, still producing innovative music into his seventies.