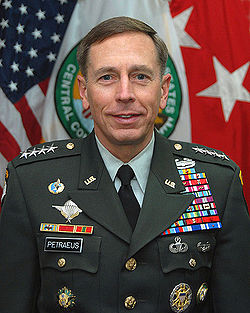 General David Petraeus is the former Director of the Central Intelligence Agency and the former head of the U.S. Central Command, the region spanning from Afghanistan to Egypt. As head of the U.S.-led multinational force in Iraq he led the successful 'Surge' strategy, destroying insurgents terrorist groups. He was unanimously confirmed by the US Senate, particularly because of his long-established reputation for honesty. Speaking of honesty, Petraeus stepped down from his CIA post after getting caught in an extramarital affair.

Petraeus, 68, has a wife Holly and two children, a son and a daughter.[1] He was born in Cornwall-on-Hudson, New York, to Sixtus and Miriam Petraeus. Attended and was a 1970 graduate of Cornwall Central High School. From there he attended West Point military academy. Petraeus would earn high marks, graduating top of his class. After graduating, he married Holly Petraeus, the daughter of General William A. Knowlton, a four-star general and NATO commander. He earned an M.P.A. and a Ph.D. His doctoral thesis was The American military and the lessons of Vietnam: a study of military influence and the use of force in the post-Vietnam era., 1987. Later, he would author the manual devoted to counterinsurgency operations. This new counterinsurgency field manual became the backbone for an overwhelming success by the U.S. military in Iraq.

Leading up to the Surge

Senator Hillary Clinton, who helped appoint him, called him a liar when he gave his September 2007 report on President Bush's "troop surge".[2] In response to this report, Petraeus was the victim of liberal advocacy group MoveOn.org's "vicious"[3] attack campaign subsidized by the New York Times[4] which contributed a monetary discount for an advertisement, without foundation, entitled "General Petraeus or General Betray Us"? The accusation of treason sparked so much controversy that even the Democrat-controlled Senate passed a resolution condemning the attack on General Petraeus.[5]

President Bush removed Defense Secretary Donald Rumsfeld and tried the warfighting strategy proposed by General Petraeus, who was given additional forces. Petraeus sent in 30,000 additional combat troops under Lt. Gen. Ray Odierno, who contained the insurgency and cleared the enemy out of the "belts" surrounding Baghdad. Sunni leaders and tribal chiefs, fed up with al Qaeda atrocities, set up militias in a tactical alliance with the coalition and Iraqi government forces, The long ceasefire of Moqtada al Sadr's Shia extremists helped to reduce sectarian tension. Within a few months, Baghdad had been transformed: attacks were down by 60%, civilian deaths had dropped 70% and sectarian attacks of one sort and other had fallen by a staggering 90%. The success of "The Surge" strategy made possible the achievement of Bush's timetable for the withdrawal of American troops from Iraq's major cities in summer 2009.[6]

On September 11, 2012, four Americans, including U.S. Ambassador Christopher Stevens were murdered in Benghazi, Libya in a terrorists attack on the US embassy compound by Islamic extremists. Despite internal communications that acknowledge the terrorist nature of the attacks within minutes, the Obama administration falsely reported to the public that the attacks were instead a protest gone awry after an anti-Islamic YouTube video.

Some Obama officials become frustrated with Dir. Petraeus as he opposed efforts to edit out mentions of terrorism from the public Benghazi talking points. Petraeus deputy, Mike Morell, was given charge over the edits, and aligned himself with Hillary Clinton’s State Department against Petraeus's desires.[7] Petraeus was blackmailed in a sex scandal and removed from his position.

Rep. Louie Gohmert, in addressing the Congress, said on the House floor,

“This administration knows that General Petraeus has information that would virtually destroy any credibility that the administration might still have nationally and internationally, so what else would this administration do but leave over his head for a year and a half the threat, ‘We’re going to prosecute you so you better keep your mouth shut.'

“So if you wonder why General Petraeus has not come out in the last year in a half and said, ‘No those weren’t our talking points, somebody that created them needs to be prosecuted, it was a fraud on the American people.' He’s not going to say that, he’s got this administration hanging a prosecution over his head. What do you expect?

I doubt he’ll ever be able to say it without worrying about something over his shoulder coming on after him. So here he is, he’s been defensive of the administration, he’s been a good solider, said what he’s wanted them to say, he hasn’t told all he could say and they’re going to make sure he doesn’t or if he does, he pays a heavy criminal price.”