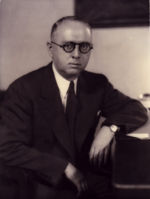 David K. Niles (November 26, 1890–September 28, 1952; Boston, Massachusetts) was a political advisor who worked in the White House from 1942–1951 for the administrations of Franklin Roosevelt and Harry Truman. Niles was one of only two Roosevelt aides retained by Truman upon his assumption of the presidency. Niles was instrumental to the attempts of the Zionist lobby to gain United States support for the creation of a Jewish homeland in Palestine. [2] Niles was often capable of bending the president's ear to Zionist arguments. In 1947, President Truman awarded him the Medal for Merit.

Niles served as both the Associate Director and Director of Boston's Ford Hall Forum (1921-1952), the Director of the American Business Census in Massachusetts (1933-1934), a consultant, director, and assistant administrator of the Works Progress Administration (1936-1939), Special Assistant to the Secretary of Commerce (1939-1940), as well as a consultant and advisor to the Office of Production Management and War Production Board before becoming a presidential advisor.

Whittaker Chambers, a defector from Soviet intelligence and Presidential Medal of Freedom award recipient, informed the FBI that Comintern operative John Herrmann reported to him Niles was involved in an inappropriate relationship with another Soviet agent as early as 1934.[1]

This article is part of the
Venona
series.

"An NKVD Venona document, a decrypted Soviet message, from New York to Moscow reported on a plan to send a husband and wife team of NKVD 'illegals' to Mexico.[4] The message said, 'Through CAPITAN'S (Roosevelt’s) advisor David Niles –will take 3-4 days, will cost 500 dollars.... [A]round Niles there is a group of his friends who will arrange anything for a bribe. Through them TENOR (Michael W. Burd) obtains priorities and has already paid them as much as 6000 dollars. Whether NILES takes a bribe himself is not known for certain.' Burd was a Soviet agent and an officer of the Midland Export Corporation in New York City."