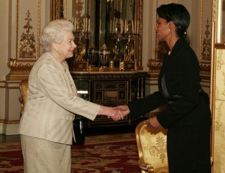 Dr. Rice is a classically trained pianist and fourth-generation pianist on her mother's side. "At 15 she performed Mozart's Piano Concerto in D minor with the Denver Symphony Orchestra, her prize for winning a student competition. Until college she intended to pursue music professionally." [2] On December 1, 2008, Secretary Rice gave a piano recital for Queen Elizabeth II at Buckingham Palace.[3]

As Provost, Dr. Rice balanced the budget, even though the deficit was said to be impossibly large, a prediction which Rice happily proved wrong.[6]

In 1986, while an international affairs fellow of the Council on Foreign Relations, Rice served as Special Assistant to the Director of the Joint Chiefs of Staff. From 1989 to March 1991 she directed and also directed in a senior position, of Soviet and East European Affairs in the National Security Council. She was also Special Assistant to the President of National Security Affairs. Rice was instrumental to help with developing Bush's and James Baker's policies to make full reunification of Germany. By 1990 she was already George H. W. Bush's principal advisor on the Soviet Union and one of his assistants for National Security Affairs. She impressed President George H.W. Bush, so much, that he said to Gorbachev she "tells me everything I know about the Soviet Union."[7]

She was helping George W. Bush for his victorious campaign for President in 2000, a later became a key advisor. She said in departure from the failed Clinton policies of the 1990s and an articulation of a new Bush plan at the convention speech “...America's armed forces are not a global police force. They are not the world's 911.”[8]