Paul Kurtz was the founder of the Center for Inquiry.

The Center for Inquiry (CFI) is a nonprofit organization. Its main mission is to foster a secular society based on secular humanist values. CFI has headquarters in Amhurst, New York and Washington, DC,[1] and also has number of locations around the world.

The Center for Inquiry was founded in 1991 by Paul Kurtz and was formed by the combining of two similarly focused organizations. Namely, the Committee for the Scientific Investigation of Claims of the Paranormal (CSICOP) and the Council for Secular Humanism.

The main programs are the Committee for Skeptical Inquiry and the Council for Secular Humanism, along with the Office of Public Policy, CFI On Campus, African Americans for Humanism, and the CFI Institute.[1] The CFI Institute partners with the Graduate School of Education of the State University of New York at Buffalo to offering the accredited Ed.M. program in Science and the Public, available entirely online.[2]

CFI has numerous publications, including: Skeptical Inquirer and the Council for Secular Humanism's Free Inquiry (with a combined readership of nearly 100,000). Additional magazines at CFI are read in the U.S. (The American Rationalist), United Kingdom (The Skeptic), and Perú (New Skepticism, and The Journal of Applied Philosophy).[3] Philo: A Journal of Philosophy is a peer-reviewed academic journal which publishes original articles in all fields of philosophy. The Scientific Review of Mental Health Practice is a peer-reviewed journal in clinical psychology, psychiatry, social work, and allied disciplines.[2] CFI has a 70,000 volume library.

Center for Inquiry and accusations of sexism

In The Nation, Katha Pollitt wrote in ther article Atheists Show Their Sexist Side:

Center for Inquiry accused of sexism by atheist Rebecca Watson

Rebecca Watson indicates the CFI decided to bury this complaint and allowed Krauss to be on one of its subsequent cruises.[10]

Center for Inquiry and its lack of racial diversity

Sikivu Hutchinson criticizes Center for Inquiry's all white board of directors

In 2016, the Center for Inquiry and the Richard Dawkins Foundation for Reason and Science merged with the merger completed on December 31, 2016. Richard Dawkins and two of his board members joined the CFI Board.[1] 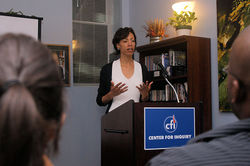 See also: Western atheism and race and Atheism and leadership

In response to atheist Kavin Senapathy's criticism of CFI's lack of racial diversity, CFI pulled all the articles/episodes of Senapathy from their website.[14]

See also: The Translations Project and Atheism vs. Islam and The God Delusion The Guardian reported about Richard Dawkins' book The God Delusion:

Stephanie Zvan is an atheist blogger at Freethought Blogs. She wrote an open letter to the Center for Inquiry about the events surrounding the Dawkins' Twitter post relating to a video comparing feminism to radical Islam that "CFI now has a harassment denialist on its board, a harassment denialist who has tied his denialism to his work at your organization."[17]

For more information, please see: Dawkins' disinvitation to speak at a skeptics conference due to a feminism/Islam controversy

Center for Inquiry's infighting and ouster of founder Paul Kurtz

Austin Dacey, a United Nations representative for Center for Inquiry and figure in the Atheism 3.0 movement criticized the New Atheism movement for insisting on the removal of religion from the public square on grounds that doing so would shield religion from criticism and circumvent debate on morality.[19]

On October 10, 2010, a contentious exchange between members of the Secular Humanism faction of atheism founded by Paul Kurtz and the atheist Ron Lindsay was caught on tape.Video - Part oneVideo - Part 2 During the exchange Ron Lindsay said that infighting has been occurring within the Secular Humanism faction of atheism for years.[20]

A Paul Kurtz supporter said that Kurtz was censored by Ron Lindsay and his supporters and driven out of the organization that he founded (Center for Inquiry).[21]

Richard Dawkins, who is on the Center of Inquiry's board of editors, accused one of the staff of the Richard Dawkins Foundation for Reason and Science of embezzlement.[23] See: Atheist organizations and scandals and Atheism and stealing