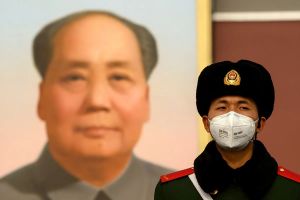 Approximately one month before the outbreak of the Global Wuhan coronavirus pandemic in mid November 2019, an exercise was organized by the Davos World Economic Forum in cooperation with the Johns Hopkins Center for Health Security and the Bill & Melinda Gates Foundation. The exercise was held in New York City on 18 October 2019, for the specific purpose of mapping the response of transnational corporations and governments to a coronavirus epidemic.[1]

The pandemic spread as a result of human-to-human transmission beginning in Wuhan. As it metastasized, the World Health Organization (WHO) parroted the Chinese Communist Party line that the Wuhan virus could not be passed from one human to another, and that it was “racist” to refer to the virus by its place of origin.[2]

Microsoft founder Bill Gates claimed that the Covid-19 outbreak in Africa could cause "10 million deaths," hours before Egypt's ministry of health confirmed its first case.[3]

Chinese researchers indicate the novel coronavirus may have begun human-to-human transmission in late November 2019 from a place other than the Huanan Seafood Market in Wuhan. A study published on ChinaXiv, a Chinese open repository for scientific researchers, reveals the new coronavirus was introduced to the seafood market from another location, and then spread rapidly from market to market.[5]

China claimed—for almost two months—that coronavirus had originated in a Wuhan seafood market. That is not the case. @TheLancet published a study demonstrating that of the original 40 cases, 14 of them had no contact with the seafood market, including Patient Zero.[6]

The WHO, headed by a Marxist fellow traveller, publicly announced that the Wuhan virus posed no threat of contagious reaction between humans.[9]

Rresearchers have identified a "tipping point" at which the virus goes from dangerous to deadly in extremely susceptible patients. A WHO report written 18 days later based on observation in China stated that 80% of infections ("mild cases") can self-isolate, 13% require hospitalization, and 6% require intensive care. While many patients experience nothing more than a mild cold, one in seven patients develops difficulty breathing and other "severe" complications, while 6% become critically ill and require hospitalization to stabilize their condition, risking death if they can't receive the highest level of care.[10] Some questions remain regarding whether the developed world has enough hospital beds available to treat cases requiring hospitalization. WHO said the coronavirus infection rate (as opposed to death rate) was thought to be the same as the flu when the virus was only known in China but has since been found to be two to three times that infectious.[11]

By the fifth week, 12 of 61 reported infections in Iran were dead. Iran's vice president and deputy health minister contracted the virus.[12] The Iranian regime will not quarantine any cities or town to fight spread of the virus.[13] Iran has the highest number of deaths outside China. A mob set fire to a clinic treating patients.[14] Like China, the people of Iran have no confidence in government bureaucrats and information coming from the government about the virus.[15]

The Kingdom of Saudi Arabia banned foreigners from entering the country during the annual pilgrimage to Mecca;[16] historically the largest contingent of pilgrims from any one single nation has been from Iran.

Italy reported 6 deaths the fifth week, the most in Europe, and began using armed police to enforce quarantine. Populist leader Matteo Salvini attacked the leftist regimes lack of immigration control policies.[17] On March 9, 2020 the entire country went on lockdown. The country's government declared that sporting events would occur without fans until April 3rd as a consequence of the Coronavirus escalation.[18]

Bloomberg News has the story: 3/18, “99 percent of those whose died from virus had other illness, Italy says”:[19]

Lots of prior medical conditions, weakened immune systems, and all these people had been treated for those prior conditions with toxic medical drugs. Furthermore, once they’d been diagnosed with coronavirus, many of them were put on highly toxic antiviral drugs. Thus delivering the final blow. These people are counted as “coronavirus deaths” by the other Italian reporting agencies, who are jacking up the numbers.[20]

Kim Jong-un reportedly departed from Pyongyang for "for a considerable time" because of Coronavirus concerns.[22]

The government of socialist Emmanuel Macron used the coronavirus outbreak to ban large gatherings, including the weekly Yellow vest protests which had been demanding resignation of the authoritarian dictator for a year and half.[23]

A Chinese woman was violently kicked by a bearded Muslim man in South London Halal butcher shop and thrown out.[24] This was not the first incident of UK Muslims being violently racist towards people of Chinese appearance. In Birmingham, a South Asian law student was savagely beaten and hospitalised by a gang after she stood up for her Chinese friend who was subjected to coronavirus taunts.

In 2020, Destiny Church leader Brian Tamaki claimed that Christians who pay tithes, believe the Bible and are filled with the Holy Spirit have a Psalm 91 “protection policy” against the COVID-19 strain of Coronavirus.[25]

A bus containing over 50 people from coronavirus-hit Wuhan was attacked by angry demonstrators in a small Ukrainian town. Protesters lit fires and hurled stones at the six-bus convoy in Novi Sanzhary, Ukraine. Armoured personnel vehicles were deployed to unblock the road and take the evacuees to a health spa where they will spend 14 days in quarantine.[26]

At a 2020 mass, Pope Francis offered prayers for the ill, for health workers and others who had been troubled by the coronavirus epidemic.[27]