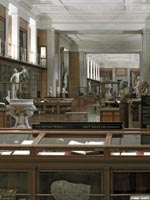 The British Museum is one of the world's foremost museums. Its collection consists of more than 7 million objects and is visited by more than 4.5 million people a year.

The history of the British Museum began when Sir Hans Sloane (1660-1753) left his collection of more than 71,000 objects to King George II for the nation in return for payment of £20,000 to his heirs. A group of Trustees was charged with supervising the collection. The King did not show much interest first but he was persuaded to accept it and an Act of Parliament established the British Museum in 1753.

The British Museum opened to the public on 15 January 1759. Since its collection belonged to the nation, free admission has been granted from the beginning. The purchase of Sir William Hamilton's collection of Greek vases and other classical objects in 1772 meant the beginning of numerous other acquisitions of antiquities, including the Rosetta Stone, a basalt tablet with inscriptions in Greek and in Egyptian hieroglyphic and demotic scripts on it, which provided the key to the decipherment of the ancient Egyptian hieroglyphic script.

The British Museum collection includes statuary and decorated architecture from throughout pharaonic history, often inscribed with hieroglyphs. Many other aspects of ancient Egyptian culture are represented: coffins and mummies of individuals, but also furniture, fine jewellery and other burial goods. [1] Mummy case and portrait of Artemidorus around AD 100-120, from Hawara, Egypt.

The British Museum has won the 2011 Art Fund Prize for its groundbreaking project A History of the World.

From the Middle East.