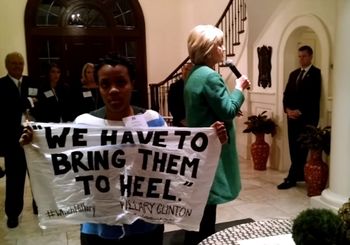 "a key moment when the candidate takes what at least appears to be a bold stand against certain extremes in their party" and as "a calculated denunciation of an extremist position or special interest group." Such an act of repudiation is designed to signal to centrist voters that the politician is not beholden to traditional, and sometimes unpopular, interest groups associated with the party."[9]

The origins of the Democratic party's "black problem" can be traced back to Lyndon Johnson and the 1957 and 1964 Civil Rights Acts.

The bill passed 285–126 in the House with Republicans providing the majority of votes 167–19 and Democrats 118–107.[15] It then passed 72–18 in the Senate, with Republicans again supplying the majority of votes, 43–0 and Democrats voting 29–18. Sen. John F. Kennedy of Massachusetts, who later ran for president, voted against it.[16] It was the first federal civil rights legislation passed by the United States Congress since the Republicans passed the Civil Rights Act of 1875. Johnson told Sen. Richard Russell,

"These Negroes, they're getting pretty uppity these days and that's a problem for us since they've got something now they never had before, the political pull to back up their uppityness. Now we've got to do something about this, we've got to give them a little something, just enough to quiet them down, not enough to make a difference. For if we don't move at all, then their allies will line up against us and there'll be no way of stopping them, we'll lose the filibuster and there'll be no way of putting a brake on all sorts of wild legislation. It'll be Reconstruction all over again."[17]

The Democrats reversal on civil rights culminated with Johnson signing the bi-partisan Civil Rights Act of 1964, which he called "the N*gg*r Bill."[18] In lobbying fellow Democrats, Johnson said,

"I'll have them n*gg*rs voting Democratic for two hundred years."[19]

Democrats tried to block passage by filibustering for 75 hours, including a 14-hour and 13-minute speech by the Exalted Cyclops, Sen. Robert Byrd,[20] who later became Senate Democrat Leader in the Reagan era. The law was intended to block Republican gains in the South followed with buying off Blacks through Great Society welfare and affirmative action programs. According to LBJ biographer Robert Caro, Johnson told his chauffeur:

"Let me tell you one thing, n*gg*r. As long as you are black, and you’re gonna be black till the day you die, no one’s gonna call you by your g*dd*mn name. So no matter what you are called, n*gg*r, you just let it roll off your back like water, and you’ll make it. Just pretend you’re a g*dd*mn piece of furniture."[21] The Biden Crime Bill of 1994. Liberal icons Sen.s Dianne Feinstein, John Kerry, Joseph Biden and Paul Wellstone are clearly visible with President Bill Clinton. The bill is known for its sentencing disparities which led to mass incarceration of Blacks.[22]

Under the Biden Crime Bill, more the 250,000 African Americans were imprisoned in the United States than under President Reagan,[23] a fact for which both Joseph Biden and Hillary Clinton took credit for.[24] Hillary Clinton was at his side when Bill Clinton raised mandatory sentencing guidelines which disproportionately sent Blacks to prison, giving the United States the highest mass incarceration rate in the world.[25] Biden and the Clinton's championed the “three strikes you're out” law, passed a crime bill that created dozens of new federal capital crimes, mandated life sentences for some three-time offenders, and authorized more than $16 billion for more state prisons. By the time the Clinton's left office in 2001, the United States had the highest rate of incarceration in the world. Human Rights Watch reported that in seven states, African Americans constituted 80 to 90 percent of all drug offenders even though they were no more likely than whites to use or sell illegal drugs. Prison admissions for drug offenses reached a level in 2000 for African Americans more than 26 times the level they had been under Ronald Reagan.[26]

The Clinton's divisiveness and hate was targeted at a diverse group of people.[28] Hillary Clinton publicly advocated treating minority youth like dogs,[29] made mocking and offensive comments about Jews and retarded children.[30] These sentiments were confirmed by Hillary's campaign chair, John Podesta, and her campaign manager, Robby Mook. According to all major, reputable sources, Hillary Clinton and/or her organization and its surrogates started the birther movement to discredit Barack Obama.[31]