Difference between revisions of "Bernard Madoff" 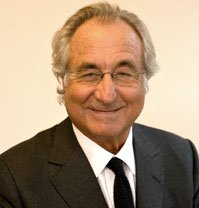 Bernard L. Madoff (born April 29, 1938) is in dollar terms the biggest crook in history. While holding many prestigious positions such as chairman of the NASDAQ stock exchange, he directed his company, Bernard L. Madoff Investment Securities, in a Ponzi scheme that last for decades. The scheme was exposed in December, 2008, revealing that over 13,000 investors, especially from the Jewish community, lost about $13 billion. The exact amount will take years to determine. People invested and Madoff sent them monthly reports showing in detail how their investments were rapidly growing. There actually were no investments. He was using money from new investors to pay off old clients who needed to redeem their holdings. When the Financial Crisis of 2008 broke, so many people needed cash fast--and so few new ones came to invest--that he could not pay anyone. He told his children and they called the authorities.

The watchdog of Wall Street, the Securities and Exchange Commission, was warned repeatedly of what was happening. It made superficial investigations, accepting at face value Madoff's lies, then cleared Madoff. Canny investors, realizing that Madoff's promises of a guaranteed 10% annual return were impossible, avoided him. But he had a winning personality as he consented when people came and begged him to accept his money. He also had feeder operations in the U.S. and Europe that were complicit in his scheme by directing billions of dollars to his funds in return for very high paybacks; they now face very complex legal proceedings.

Madoff pleaded guilty to securities fraud. His company was, according to his own words after his arrest, "Basically a giant Ponzi Scheme." [1] He was sentenced to 150 years in federal prison.

Before his arrest, Madoff was a leader in philanthropy.

Abortion groups invested heavily in Madoff. The result, Planned Parenthood is laying off about 20 percent of its staff. Another Madoff investor, the Florida-based Picower Foundation shut down in December. The foundation was worth $1 billion and is one of the top financial backers of pro-abortion groups. The JEHT Foundation gave $24 million in 2008 to abortion groups as well as the ACLU, also announced closing its doors in December. [2]