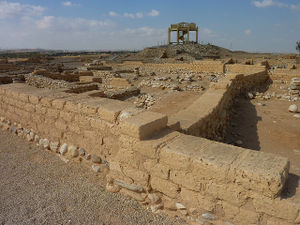 Beer Sheba, Beersheba or Beʾer Sheva (literally Well of the Seven Oaths) is a town in the south of Israel and with a population of 203,604 (2015) it's the largest city in the Negev desert.

Beersheba is first mentioned as the site where Abraham, founder of the Jewish people, made a covenant with the Philistine king Abimelech of Gerar (Genesis 21). Isaac and Jacob, the other patriarchs, also lived there (Genesis 26, 28, 46). The name seems to be a Hebrew play on words—beʾer “well”; shevaʿ “oath,” or “seven” (referring to the seven lambs of Genesis 21)—though a Canaanite origin has also been suggested. Beersheba was at the southern edge of permanent agricultural cultivation in ancient Israel and represented the southern extremity of the country—hence the phrase “from Dan to Beersheba” (first used in Judges 20; Dan is in far northern Israel).[1]

Tels (prehistoric settlement mounds), are characteristic of the flatter lands of the eastern Mediterranean, particularly Lebanon, Syria, Israel and eastern Turkey. Of more than 200 tels in Israel, Megiddo, Hazor and Beer Sheba are representative of those that contain substantial remains of cities with biblical connections. The three tels also present some of the best examples in the Levant of elaborate Iron Age, underground water-collecting systems, created to serve dense urban communities. Their traces of construction over the millennia reflect the existence of centralized authority, prosperous agricultural activity and the control of important trade routes.[2]