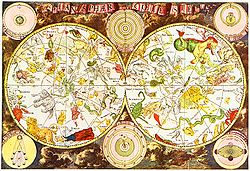 Astronomy is "the study of objects and matter outside the earth's atmosphere and of their physical and chemical properties." [1] It has been studied since ancient times, forming a major part of the religions of many early civilizations such as the Egyptians and the Aztecs. Stonehenge in England is also thought to be an astronomical observatory. The handing down of complex astronomical teachings shows these early civilizations must have had formalized systems of education.

Astronomy was crucial to the development of safe and accurate navigation for ships, and observations of the movement of heavenly bodies helped lead to the theories we now call physics. In fact, much of astronomy today relies on physics, thus many astronomers are considered astrophysicists.

Prior to written history, man gazed upon the stars and used them for practical reasons, such as directional indicators for nomads and seafarers, or seasonal indicators for farming. Astronomy began its start as a science in ancient Mesopotamia, when priests marked the path of the sun and familiar constellations; the ritualistic nature of these early attempts linked actual astronomical observations with the superstitions of astrology, a practice that continues to this day.

The first men who studied astronomy as science were the Greeks, who linked it in their studies with a valuable mathematical tool: geometry, and scientists in Greek colonies along the western coast of what is now Turkey used this tool to make more and more accurate calculations. About 400 B.C. Pythagoras came to the conclusion that the earth was spherical, and that it moved in space. Aristarchus of Samos (310-230 B.C.) discovered that the earth revolved around the sun and spun on its own axis; he would be charged with heresy against the gods as a result.

About 150 B.C. Hipparchus, despite having made very careful observations and calculations, kept to the theory that the earth was the center of the universe, with the sun, moon, planets, and stars revolving around it; ten years later Claudius Ptolemy of Alexandria would write the Almagest, a work that perfected on Hipparchus' accurate calculations of the motions of the stars. His efforts would become known as the "Ptolomaic system", and would stand the tests of observation for the next 1,300 years.

The problem was time and numbers. Time was a problem because for the ancient Greeks there was no way to accurately measure it; i.e. they could not get a precise fix on the position of Jupiter at midnight if they did not tell that it was midnight. As to numbers, the largest written number was the myriad, a number equivalent to 10,000. Archimedes of Syracuse (287-212 B.C.), perhaps the greatest mathematician of all time, was at home with large numbers. In his The Sand Reckoner he thought of the universe as being unable to hold as much as what he calculated to be a myriad of myriads multiplied by itself seven times, then multiplied by 1,000, which came out to be 1063

During the Middle Ages clocks were developed; the first mechanical clocks which could be wound via weights emerged about 1300 A.D. in Europe; they would not improve upon astronomy until about 1500 when Copernicus put much strain on the Ptolomaic system; his calculations proved that the sun, and not the earth, was the center of the solar system, leading to condemnation from Martin Luther and the Church for what they called his anti-Biblical heresy. Indeed, some of his fellow scientists who rushed to his defense would be burned at the stake. One scientist who condemned him - the Dane Tycho Brahe - would have no part of Copernicus, but ironically his own observations and precise calculations, as well as his designs of the best astronomical instruments of his time, would later ensure that it was Copernicus, and not Brahe, who had been correct all along.

The first man to have turned a working telescope skyward was the Italian Galileo, who observed the phases of Venus, the craters of the moon, and most importantly, the motions of the four moons around Jupiter. Both his discoveries of the Venusian phases and Jupiter's moons could not be explained by the Ptolomaic theory; they could only be explained by the works of Copernicus, and he made his views known to the public, leading eventually to condemnation by the Church, a forced recantation, and house arrest for the remainder of his life. A generation later, Johannes Kepler (1571-1630) would take advantage of Tycho's works, leading to three astronomical laws which are still in use today:

These are known as Kepler's laws of planetary motion. Isaac Newton (1642-1727) would use both Kepler's laws and Galileo's work on mechanics in his formulations on gravity; his works and equations would lead directly to the discovery of the planets Neptune and Pluto.

Starlight As An Objection To The Big Bang Theory

The starlight problem is an argument against the Big Bang theory which theorizes that the universe is billions of years old.[2] The creation science organization Answers in Genesis has stated the following regarding the starlight problem for the Big Bang Theory and the work of Charles W. Misner is cited who published his work in Physical Review Letters:

Starlight As An Objection to Young Earth Creationism