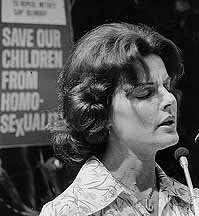 Anita Bryant (born 1940) was an extremely successful singer and commercial endorser who became an early opponent of homosexuality. As a result, the entertainment and corporate world ostracized her. A devout Christian born and raised in Oklahoma, Bryant won the prestigious talent competition of Arthur Godfrey at age 16, was runner-up in the Miss America competition at age 19, and next recorded three popular smash-hit songs, of which a couple were imitated later by famous groups such as the Beatles. In the late 1960s and 1970s Anita Bryant became one of the most successful endorsers of goods, most famously Florida orange juice. She was an extremely popular celebrity in her time, and had such broad appeal that she performed the National Anthem at Super Bowl III in 1969 and "The Battle Hymn of the Republic" at the burial of former President Lyndon B. Johnson in 1973.

Living in South Florida, Bryant saw Florida's Dade County (now Miami-Dade County) pass an ordinance in 1977 granting anti-discrimination rights to homosexuals. Within four weeks, Bryant, along with supporters from the Roman Catholic Archdiocese of Miami and the Florida Conservative Union, had collected 64,000 signatures, many more than the 10,000 needed to put the issue on the ballot.[1] The ordinance was successfully repealed in a referendum that passed in a landslide vote of 69% to 31%. She said her main concern was the recruitment of children into the homosexual lifestyle, and she founded a group called Save Our Children for that purpose. It was not until 1998 that Miami-Dade County reinstated the ordinance by a narrow 7–6 vote.

Bryant also successfully led a campaign for the Florida legislature to prohibit homosexuals from adopting children. Over two decades later, in 2004, that law was upheld by the Court of Appeals for the Eleventh Circuit.[2]

Homosexual advocates vilified Bryant for her stance, and continue to insult her to this day. They organized a boycott of her corporate sponsors and they obtained denunciations of Bryant by other entertainers. Four self-proclaimed homosexuals slapped Bryant with a pie in her face during a speaking event in Des Moines, Iowa.[3] Bryant responded immediately by saying a prayer for her assailants. Police authorities refused to prosecute for the assault.

The efforts of the homosexual activists succeeded in destroying Bryant's career. The corporations refused to continue to hire her; the music industry excluded her. Subsequent attempts by Bryant to further her entertainment career in small towns were unsuccessful, and liberal newspapers hound her about that also.[4]

Homosexuals continue to attempt to discredit Anita Bryant as part of their current effort to repeal the Florida law against adoption by homosexual couples. The South Florida Sun-Sentinel reported that on March 25, 2007 a "meeting, organized by local, state and national gay advocacy groups, was held to discuss a proposal in Tallahassee to repeal Florida's 30-year-old ban on gay adoption. Organizers said the ban is a remnant of former beauty queen and orange juice spokeswoman Anita Bryant's anti-gay crusade of the 1970s."[5]

It should be noted that Anita Bryant was largely correct in that she believed homosexuals wanted to recruit children into their ways, for example noted homosexual "rights" activist Harry Hay protested the exclusion of groups like NAMBLA in the 1990s (that had previously been in the homosexual mainstream) and Hay refused to participate in the official 1994 parade in New York City commemorating the 25th anniversary of the Stonewall riots because of its 'exclusionary policies'. Instead he joined an alternate parade called "The Spirit of Stonewall."