Difference between revisions of "Animal rights" 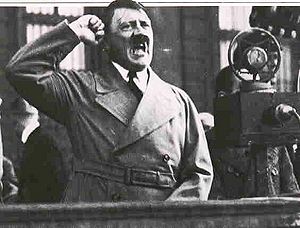 Adolf Hitler was a supporter of animal rights. The Nazis pioneered the concept of animal rights and imposed severed restrictions on experiments on living animals.[1] The Nazis also used animal right as a tool to persecute the Jews as part of their genocidal campaign known as the Holocaust.[2] Neo-fascists, i.e. modern day people who advocate the fascist and Nazi ideology of Benito Mussolini and Adolf Hitler, support animal rights.[3]

The animal rights movement (sometimes called the animal liberation movement) is a liberal philosophical movement which seeks to get animals the same rights that humans have. Most animal rights activists oppose the practice of using animals as commodities or property.[4] Typically, animal rights activists oppose hunting, animal testing, wearing fur, and the consumption of meat. Many practice a vegetarian or vegan diet. Some activists (especially those who identify themselves as animal liberationists) even disagree with the practice of owning pets and seeing-eye dogs.[5] The concept of animal rights was pioneered by Nazi Germany.[6]

Detractors to the animal rights movement argue that since animals do not have the capacity to make moral decisions they can not be given the same rights as humans.[4] Some opponents even argue that the goals of the movement are not animal liberation, but placing restrictions on the lives of other people.[7]

The animal rights movement is gradually loosing their support.[9]

Animal rights was supported by the Nazi regime in Germany under the dictatorship of Adolf Hitler which lasted from 1933-1945.[10] It was the Third Reich where scientific experiments on living animals were outlawed. The Nazis used this animal rights as a tool to persecute the Jews as part of their genocidal campaign known as the Holocaust.[11]

Neo-fascists, i.e. modern day people who advocate the fascist and Nazi ideology of Benito Mussolini and Adolf Hitler, support animal rights. Neo-Nazis in Germany used the slogan "Stop animal experiments - use Turks instead". In the United Kingdom, fascist groups have demonstrated animal rights policies. The aim of a group of fascists in the United Kingdom include "Total ban on all animal experiments, Total ban on the use of animals in ANY form of entertainment, Total ban on ALL hunting or shooting of animals."[12]

Domestic terrorism by animal right organizations in the United States is on rise.[13] The animal right group Animal Liberation Front (ALF) is considered to be a terrorist organization by the United States Department of Homeland Security.[14] The ALF is considered to be terrorist threat by both the Federal Bureau of Investigation (FBI) and Scotland Yard. The tactics used by the ALF include vandalism, economic damage, arson and burglary. In the United Kingdom, the ALF used mail bombs and car bombs. In North America, the ALF activities resulted in millions of dollars of damage.[15] According to John Lewis, deputy assistant of FBI, animal rights extremists together with environmentalists are involved in over 1,200 criminal incidents since 1990.[16] Terrorism expert professor Paul Wilkinson at St Andrew's University said animal rights movement in the United Kingdom now tops the list of causes which result in violence in the country.[17] Frankie Trull, founder of the Foundation for Biomedical Research (FBR),[18], wrote in the Los Angeles Times "Animal rights extremism is getting worse. ... These extremists have chosen to circumvent the legal system and use fear and terror as their primary weapons. ... Animal rights groups sensationalize animal research by portraying scientists as violent animal torturers. In fact, researchers who use animals in their quest for new drugs and medical breakthroughs are human beings who dedicate their lives to alleviating the pain and suffering of both people and animals. Animal research is done humanely and only when necessary. ... It's time for law enforcement to send a message to animal rights extremists by making a more concerted effort to apprehend those involved."[19]