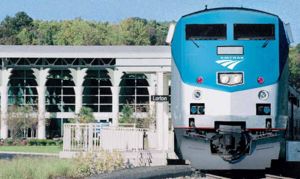 Amtrak is "the blending of the words 'American' and 'track'". Amtrak is "also known as the National Railroad Passenger Corporation". "Amtrak was created by Congress in 1970 to take over the passenger rail services previously required to be operated by private freight railroad companies in the United States. "[1]

Amtrak was originally intended to be a financially self-supporting organization, but has never been profitable in its 39-year history, and instead has consumed billions of dollars of American taxpayers money supporting intercity rail services that are little used and unreliable. The Pew Charitable Trusts determined that 41 out of 44 Amtrak routes lost money in 2008. The largest loss per passenger was $462 per passenger on the Sunset Limited, which runs from New Orleans to Los Angeles. The average loss was $32 per passenger trip.[2]

During his years in office, George W Bush attempted to force Amtrak to reform by threatening to end the flow of taxpayer money to Amtrak, but his efforts were thwarted by Congress following lobbying by liberal pressure groups, such as the National Association of Railroad Passengers, who falsely claimed that doing so would cut off rural communities. However, almost all rural settlements in the US are, in fact, connected by all-weather roads easily traversable by private vehicles.