From Conservapedia
(Redirected from Washington University in St. Louis)
Jump to: navigation, search

Washington University is a private university in St. Louis, Missouri, best known for its medical school. 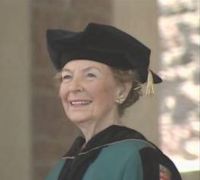 After receiving her award, Dr.Schlafly said about the disrespectful liberals, "I'm not sure they're mature enough to graduate." Schlafly also "expressed some disappointment that Chancellor Mark Wrighton did not mention homemaker in his list of some of the career paths students were embarking on." [3]