From Conservapedia
(Redirected from Race Card)
Jump to: navigation, search 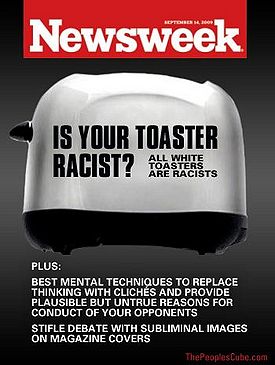 A satire photo by Oleg Atbashian of The People's Cube. It showcases the absurd lengths the Mainstream media will go to promote racial discord.
Playing the race card means to use one's own race for political or legal advantage. The term is drawn from the domain of card games, and effectively compares this action to playing a valuable card in a game of bridge or poker. The race card is an example of a thought-terminating cliché.

In the Obama era, to oppose the government takeover of the healthcare industry with Obamacare made one a racist, have a dampening and devasting effect on free speech and open political discourse of vital economic, social, and political issues.

The JournoList was a listserv comprised of several hundred liberal journalists, as well as like-minded professors and activists who privately discussed ways to assist Barack Obama's 2008 Presidential campaign in the mainstream media.[1] Employees of news organizations including Time magazine, Politico, the Huffington Post, the Baltimore Sun, the Guardian, the Nation, Salon and the New Republic participated.

Spencer Ackerman, who worked for the Washington Independent (a branch of the American Independent News Network) proposed a strategy to defend Barack Obama during the Rev. Jeremiah Wright and Church of Liberation Theology revelations (note the Marxist terminology):

At the 2010 CPAC conference, Andrew Breitbart called out New York Times reporter Kate Zernike for her attempt at playing the race card on fellow conservative activist Jason Mattera for what she claimed was a "Chris Rock voice".[3][4] Breitbart called out Zernike as "a despicable human being"[5]

Out in the lobby of the conference, Breitbart was caught on film calling out Max Blumenthal for using his reporting to smear James O'Keefe as a racist.[6] Breitbart said that he was "using Alinsky tactics to destroy people". Larry O'Connor caught up with Blumenthal and got him to admit to playing the race card, and Blumenthal eventually made a quick exit out the front. A major speech at the 2012 CPAC conference Breitbart predicted the coming Obama riots that did in fact appear following the death of Trayvon Martin, because of the continued use of the race card after every single incident.[7] He said:

This is gonna be the dog whistle election cycle. They tested it in 2011, so that [Sharpton] and his pal Touré, and that punk, Tim Jacob Wise, and Ed [Schultz], and [Rachel] Maddow can sit there and call everyone who's caucasian racist--"I heard it! I used 'is' instead of 'are'! He's a racist! That's a dog whistle"--[and] ignore it when Congressman [Jim] Moran does it against Allen West--no more! We're gonna go after you.