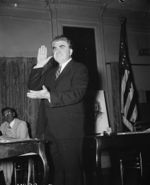 John Llewellyn Lewis (1880-1969) was a long-time leader of the United Mine Workers labor union and founder of the Congress of Industrial Organizations. He was the most prominent union leader in the U.S. after the death of Samuel Gompers in 1924. Lewis dominated the coal miners union (the United Mine Workers, UMW), 1920–1960, and created the Congress of Industrial Organizations (CIO) in the 1930s. A leading liberal, he played a major role in helping Franklin D. Roosevelt win a landslide in 1936, but as an isolationist broke with Roosevelt in 1940 on foreign policy.

Lewis was a brutally effective and aggressive fighter and strike leader who gained high wages for his membership while steamrolling over his opponents, including the United States government. Lewis was one of the most controversial and innovative leaders in the history of labor, gaining credit for building the industrial unions of the CIO into a political and economic powerhouse to rival the AFL, yet was widely hated as he called nationwide coal strikes damaging the American economy in the middle of World War II. His massive leonine head, forestlike eyebrows, firmly set jaw, powerful voice and ever-present scowl thrilled his supporters, angered his enemies, and delighted cartoonists. Coal miners for 40 years hailed him as the benevolent dictator who brought high wages, pensions and medical benefits, and damn the critics.

Lewis was born at the coal mining town of Lucas, Iowa, the son of Thomas H. Lewis, a farm laborer and coal miner from Wales, and Ann Louisa Watkins. The mother was a Mormon and the boy adopted her rigid views regarding alcohol and sexual propriety, but not her religion. He attended three years of high school in Des Moines and at the age of 17 went to work in the coal mines. He dabbled in business ventured, returned to mining, and in 1906 was elected a delegate to the United Mine Workers (UMW) national convention. He moved to Panama, Illinois, and in 1909 was elected president of the UMW local. Samuel Gompers hired him as an AFL organizer; Lewis traveled throughout the Midwest and Pennsylvania as a union organizer and trouble-shooter, especially in coal and steel districts.

In 1917 Lewis was elected a national vice-president of the UMW. The president was incompetent and Lewis soon took over, assuming the role of president formally in 1920. With 400,000 members, he called his first industry-wide coal strike in November 1919, but quickly acceded to government demands that he accept a compromise. He led another national strike in 1922, and an Ohio strike in 1927; they failed and membership plunged from 485,000 in 1922 to under 100,000 in 1932, as the owners started an open shop campaign that allowed non-union men to dig coal. Furthermore, new mines were opening in the non-union districts in Kentucky and the South.

Coal miners worldwide were sympathetic to socialism, and in the 1920s Communists systematically tried to seize control of UMW locals. William Z. Foster, the Communist leader, opposed dual unions in favor of organizing within the UMW. The radicals were most successful in the bituminous (soft) coal regions of the Midwest, where they used local organizing drives to gain control of locals, sought a national labor political party, and demanded federal nationalization of the industry. Lewis, committed to cooperation among labor, management and government, took tight control of the union. He placed the once-autonomous UMW districts under centralized receivership, packed the union bureaucracy with men directly beholden to him, and used UMW conventions and publications to discredit his critics. The fight was bitter but Lewis used armed force, red-baiting, and ballot-box stuffing and in 1928 expelled the leftists. They started a separate union, the National Miners' Union. In southern Illinois, amidst widespread violence, the "Progressive Miners of America" challenged Lewis, but was beaten back.[2] After 1935 Lewis invited the radical organizers to work for his CIO organizing drives, and they soon gained powerful positions in CIO unions, including auto workers and electrical workers. Lewis supported Republican Herbert Hoover for president in 1928; in 1932 as the Great Depression bore brutally on the mining camps, he officially backed Hoover but quietly supported Franklin D. Roosevelt. In 1936 his union made the largest single contribution, over $500,000, to Roosevelt's successful campaign for reelection.

Lewis was appointed a member of the Labor Advisory Board and the National Labor Board of the National Recovery Administration in 1933, and used it to raise wages of miners and reduce competition. He gambled on a massive membership drive, and won, as he piggy-backed on FDR's popularity: "The President wants you to join the UMW!" Coal miners represented many ethnic groups, and Lewis shrewdly realized they shared a faith in Roosevelt; he was careful not to antagonize any of the ethnic groups, and he appealed to African American members as well. He secured the passage of the Guffey Coal Act in 1935, and a second Guffey Act in 1937, both of them favorable to miners. Lewis had long had the idea that the highly competitive bituminous coal industry, with its sharp ups and downs and cut-throat competition, could be stabilized by a powerful union that set a standard wage scale and could keep recalcitrant owners in line with selective strikes. The Guffey acts made this possible, and coal entered a golden era. At all times Lewis rejected socialism and promoted competitive capitalism.

Lewis obtained from the AFL in 1934, an endorsement of the principle of industrial unionism, as opposed to limitations to skilled workers. His goal was to unionize 400,000 steel workers, using his UMW resources (augmented by leftists he had expelled in 1928). With the leaders of nine other large industrial unions and the UMW, in November 1935 Lewis formed the "Committee for Industrial Organization" to promote the organization of workers on an industry-wide basis. Key allies were Philip Murray (the UMW man selected to head the steel union); Sidney Hillman, president of the Amalgamated Clothing Workers (ACWA); and David Dubinsky of the International Ladies' Garment Workers' (ILGWU). The entire movement was expelled from the AFL in November 1938 and became the Congress of Industrial Organizations (CIO) with Lewis as the first president. The growth of the CIO was phenomenal in steel, rubber, meat, autos, glass and electrical equipment. In early 1937 his CIO affiliates won collective-bargaining contracts with two of the most powerful anti-union corporations, General Motors and United States Steel. General Motors surrendered as a result of the great Flint (Michigan) sit-down strike, during which Lewis negotiated with company executives, Governor Frank Murphy of Michigan, and President Roosevelt. U.S. Steel conceded without a strike; Lewis and Myron Taylor, chairman of the U.S. Steel Corporation, secretly negotiated an agreement between the Steelworkers Organizing Committee-CIO and the company. The AFL fought back, and gained even more members, but the two rivals spent much of their energy fighting each other, especially in meatpacking, textiles and electrical industries, and in local Democratic politics.

In the 1940 presidential campaign, far-left CIO supporters of the Soviet Union forced him to repudiate Roosevelt's anti-Nazi foreign policy, because the Soviet Union and Nazi Germany were allies at the time. Lewis supported Republican Wendell Willkie; few CIO members joined him, as they gave FDR over 85% of their votes. After Roosevelt's victory, he resigned as president of the CIO. but kept control of the UMW and withdrew it from the CIO.

Throughout World War II Lewis repeatedly called his miners out on strike, defying the government, outraging public opinion, and strengthening the hand of anti-union Congressmen. In the postwar years he continued his militancy; his miners went on strikes or "work stoppages" annually. in 1945, 1946, 1948, and 1949–1950, he led strikes that President Harry S. Truman denounced as threats to national security. In response, industry, railroads and homeowners rapidly switched from coal to oil.

John L. Lewis called illegal coal strikes in 1943 to raise wages; he made fools out of Harold Ickes and FDR and showed the weakness of the government; editorial cartoon by Carlisle in the Monrovia News-Post

After briefly affiliating with the AFL, Lewis broke with them over signing non-Communist oaths required by the 1947 Taft-Hartley Act, making the UMW independent again. Lewis, never a Communist himself, refused to allow any of his officials to take the non-Communist oath required by the Taft-Hartley Act; the UMW was therefore denied legal rights protected by the National Labor Relations Board. He denounced Taft-Hartley as authorizing "government by injunction" and refused to follow its provisions, saying he would not be dictated to. Lewis made an outstanding achievement in the postwar years when he secured a welfare fund financed entirely by management but administered by the union. In May 1950 he signed a new contract with the coal operators, ending nine months of regional strikes and opening an era of peaceful negotiations that brought wage increases and new medical benefits, including regional hospitals in the hills. He padded the union payrolls with his friends and family, ignoring or suppressing demands for a rank-and-file voice in union affairs. He retired in early 1960, as the highly paid membership slipped below 190,000 because of mechanization, strip mining, and competition from oil.