Fake news in the 2020 presidential election 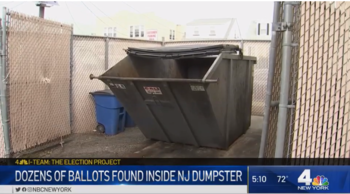 Mail-in ballots were found inside of a dumpster and a Postal worker arrested; mainstream fake news media repeatedly claimed mail-in voting was secure.[1]

Despite the lamestream media insisting that wildfires that occurred in the West Coast were due to "global warming", this this CNN headline admits otherwise that conservatives were right about arsonists.

Fake news in the 2020 presidential election began when Democrats tried to keep President Trump off the ballot with their impeachment sham. Occupy Democrats has been among far-leftists sharing blatant lies about court packing.

Amidst the Barrett Confirmation Hearing to fill the vacancy of the Supreme Court left upon the death of Ruth Bader Ginsburg, top liberal Democrats including Jerrold Nadler, Ed Markey, and Senate primary loser Joe Kennedy III have threatened to pack the court if Amy Coney Barrett is nominated to the Supreme Court prior to Election Day.[4] Sen. Richard Blumenthal, also known as Da Nang Dick for misrepresenting his Vietnam War record,[5] said that "nothing's off the table,"[6] which was concurred by Charles Schumer in mid-October 2020.[7] Joe Biden has said that he'll state his position on the matter "when the election is over."[8] This is similar to when Nancy Pelosi once said regarding Obamacare: "We have to pass the bill so that you can found out what is in it.".[9]

After even fake polling showed that a large number of Americans opposed the court packing agenda touted by Democrats and a higher percentage favored the nomination of Barrett,[10][11][12] liberals moved to redefine[13] the term by falsely[14] arguing that Republicans somehow had done such by delaying Barack Hussein Obama's judicial nominations for partisan purposes.[15][16][17][18][19][20]

Marquette Law School in Wisconsin conducted a poll just days prior to the Kenosha riots. In June 2020 the same poll saw strong support for the BLM protests, with a 61%-34% approval over disapproval rate. By August just before the Kenosha riots that support fell to parity at 48%-48%.[21] Those results turned heads at DNC and Biden headquarters. Just as Democrats and the mainstream fake news media they learned of this loss of support as a result of leftist riots, the Kenosha riot broke out at nearly the same moment. At the RNC convention the Marxist elite witnessed Republican messaging that called for support of police and the call to bring law and order back to the cities. Biden, Democrats, the liberal media went into panic mode.

All of a sudden the permissiveness and encouragement to rioters was taken down. CNN and Don Lemon called for a change in tactics. The cheerleaders suddenly began waving for the crowds to disperse, and pleading with Kamala Harris and Joe Biden to adopt the very opposite language that has been labeled as "racist" all summer long. For months anyone calling to curtail violence, destruction, attacks on police, and the threats to communities were deemed intolerant. Only now, when it looked like a bad prospect for the Democrats, did the sophisticates in the mainstream media consider rioting to be condemnable. When it was politically expedient the burning of cities and violence visited on citizens was an acceptable result.[22] If one closely observes the full image, The Hill is seen here tweeting a claim outright contradictory to the very image they provide.

While a complete summary of fake news about Donald Trump is too exhaustive to compile, these are some of the more relevant and ridiculous mainstream media narratives manufactured to criticize the 45th President.

In August 2020 it was reported that Facebook was planning for the possibility that President Trump or his campaign could try to challenge mail in ballot election results. The New York Times reported that staffers were already putting together contingency plans in the event Trump tries to use Facebook to dispute the vote by declaring the U.S. Postal Service lost mail-in ballots or that other groups interfered with the vote. Facebook officials, including CEO Mark Zuckerberg, were holding daily meetings to discuss how to minimize the platform from being used to cast doubts on the results.

The Times noted that one plan would include a “kill switch” to shut down political ads after Election Day. The company officials believe the ads, which Facebook does not check for truthfulness, could be used to disseminate misinformation.

The newspaper said YouTube and Twitter also discussed their own plans if the postelection period becomes problematic.[23] Facebook banned political pages in an attempt to influence elections.[24] As the outbreak progressed in the United States, the anti-Trump mainstream media were more concerned with instilling panic and blaming President Trump than informing the public on critical precautionary measures to avoid unnecessary strains on the healthcare and economic system.

In July 2020 MSNBC producer Ariana Pekary quit, calling the network fake news and a cancer that risks human lives, even in the middle of a pandemic. Pekary said President Trump became the primary focus of the coronavirus coverage instead of “science itself.” “As new details have become available about antibodies, a vaccine, or how COVID actually spreads, producers still want to focus on the politics. Important facts or studies get buried,” she wrote in her resignation letter.[30] NBC, CNN, CBS and Axios all reported that a man died after drinking fish tank water which President Trump had recommended as a cure for Covid-19. In response to reporters' questions at a press briefing President Trump answered that the Food and Drug Administration was looking into the possibility of using an approved drug for human consumption, hydroxychloroquine as a possible treatment for the Chinese coronavirus infection. Hydroxychloroquine (HCQ) was approved decades ago as an anti-malaria medication. A couple in Arizona, not under a medical doctor's supervision, drank fish tank water containing chloroquine phosphate, a chemical used to kill algae and fish parasites. The husband died. NBC, CNN, CBS, Axios and other leftist outfits reported that President Trump had recommended chloroquine phosphate as a miracle cure.[32]

In early September 2020 amidst a Trump rally in North Carolina, The Hill published a tweet claiming that attendees "gathered without masks", despite its picture showing the complete opposite; while the original tweet has been deleted, it has been archived.[33] Conservative news outlets have noted the sheer outrageous "reporting" conducted by the liberal site.[34] CNN airbrushed out the Washington Redskins logo from this 1970s photo of Joe Biden and son. The Washington NFL team dropped the name 'Redskins' in June 2020 because it was deemed "racist".[35]

The LA Times reported that Pete Buttigieg blamed Barack Obama for the election of Donald Trump.

The news set Twitter afire. Within hours the LA Times censored the itself and altered the quote.

In 10 debate appearances, Elizabeth Warren was never asked once about her false claims of Native American heritage.[37]

Due to Democrat corruption and election rigging, the Associated Press refused to recognize Buttigieg's claim of victory.[38]

Buttigieg was appointed by the DNC as Acting-Winner of the Iowa caucuses after an app designed by a shadowy group of Democratic operatives failed to accurately award delegates properly in the DNC's Stop Bernie attempt.[39][40] FEC records show the Buttigieg campaign also contributed to the Clinton-connected company.[41] The Department of Homeland Security (DHS), working in coordination with state elections officers, have an existing relationship to ensure computer systems and data collection systems are safe and secure. The DHS reported their offer to review the data system was rebuked by the Iowa Democrat Party.[42] The DNC lost the public's trust in the primary process on very first day of primary voting.[43] CBS race baiting fake news as it appeared on air during the 2020 presidential election.[44] Above "Latinos for Trump". Below the actual Biden Latino Outreach event.[45]

CNN was caught flipping the poll results for Bernie Sanders and Elizabeth Warren in the early primary state of New Hampshire.[54]

Priorities USA produced an ad broadcast by WJFW-NB of Rhinelander, WI using digitally manipulated clips of President Trump’s voice to fabricate unsubstantiated meaning in the President’s words. The Priorities USA ad took different audio clips from President Trump and spliced them together, deceptively manipulating them into an entirely new sentence and adding misleading subtitles to create a statement the President never uttered: “The coronavirus, this is their new hoax.” As is clear from his full remarks, President Trump was referring to the Democrats’ politicization of the coronavirus crisis and likening it to their reaction to the Mueller Russia hoax and the sham impeachment. He has never said that the virus itself was a hoax.

Numerous popular fact checkers and news reporters have declared the mischaracterization of the President’s remarks to be false:

Donald J. Trump for President, Inc. filed a lawsuit against WJFW-NBC for defamation in the wake of an advertisement carried by the station that contained intentionally false and defamatory statements about President Trump. In spite of a cease-and-desist the letter and documentation, WJFW-NBC continued to run the defamatory ad.[55] Only Axios corrected it's fake news story that President Trump had recommended fish tank cleaner as a cure for Covid-19. NBC, CNN, and CBS never corrected their fake news reporting.[56]

The first case of COVID-19 was medically verified in China on December 8, 2019 and first death occurred on December 9. The doctor who reported on the first verified cases posted on social media was forced to plead guilty to "rumormongering" and disrupting social order in late December 2019. The Beijing central government attempted to hide the outbreak from the people of Wuhan and the world. The Chinese Communist Party finally admitted publicly that a full blown pandemic was occurring in Wuhan on January 23, 2020, and the doctor who first warned the public and was convicted of a crime for doing so died on February 4, 2020. Eight hundred million people expressed their condolences on Chinese social media in 24 hours after his death was announced.

To save face for the Communist regime's deliberately incompetent handling of the COVID-19 outbreak in their country, the Chinese foreign ministry falsely accused the United States of being responsible for the corona virus outbreak.[57] On March 12, 2020 the Chinese Foreign Ministry spokesman initiated a conspiracy theory that the US military started the coronavirus in China,[58][59] Leftist media in the United States aided Chinese propaganda efforts by calling those who link the virus' origin to China were it originated as "racists".[60][61]

April 7, 2020 NBC News tweeted Communist Chinese propaganda when it was well known the Chinese Communist Party was being illusive and deceptive in its reporting on the CCP global pandemic.[62][63]