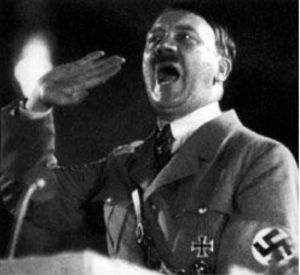 The interviewer wrote, regarding the Hitler comment, "I was stupefied. He had readily conceded that his own philosophical position did not offer a rational basis for moral judgments. His intellectual honesty was refreshing, if somewhat disturbing on this point."[1]

About 12 million perished during the Holocaust due to brutal Nazi policies and Richard Dawkins finds it difficult question on whether Hitler was wrong or right in what he did?[2] The torture, mistreatment, disease breeding conditions, gruesome experiments on human beings, and overwork were horrendous in concentration camps.[3][4][5] Charles Darwin himself was a racist and white supremacist. He predicted mass genocide claiming: Josef Mengele (1911 - 1979) was a German physician and researcher who perpetrated the Holocaust in the Auschwitz death camp. Mengele had obtained a Ph.D. based on the study of racial differences in the anatomy of the jaw. He was one of the greatest supporters of Nazi theories of racial superiority with questionable research claims. Dr. Josef Mengele's evolutionary thinking was in accordance with social Darwinist theories that Adolph Hitler and a number of German academics found appealing.[8] Mengele studied under the leading proponents the "unworthy life" branch of evolutionary thought.[9] Mengele strongly supported the murder of the physically and mentally disabled. Dr. Mengele was one of the most notorious individuals associated with Nazi death camps and the Holocaust.[10] Dr. Mengele obtained a infamous reputation due to his experiments on twins while at Auschwitz-Birkenau.[11] He was known as the "Angel of Death."

He performed experiments on humans in the concentration camps attempting to prove that disease was the product of racial inferiority and in order to genetically engineer a new species, which was the aim of his organization, the Frankfurt based Institute of Hereditary Biology and Racial Hygiene. He amputated healthy limbs and performed other unusual operations on prisoners.